...a study by the Americas Society/Council of the Americas and the Partnership for a New American Economy found that immigrants "are boosting job growth, raising home prices and more broadly helping to revive thousands of economically distressed communities." Many of those communities, CBS News pointed out, are in rural areas with a heavy manufacturing focus.

The study, prepared by Duke University economist Jacob Vigdor, used data from the U.S. Census Bureau and the American Community Survey to assess the impact of immigration on "the number of middle-class manufacturing jobs," "the health of the housing market," and "the size of the local U.S.-born population." It looked at nearly 3,100 counties within a 40-year period from 1970 to 2010.

...The study found that the "arrival of high-skilled immigrants as well as workers that are part of the essential economy has also greatly contributed to the growth of the manufacturing industry in places like Los Angeles, Houston, and in southern Arizona."

1. The Council of the Americas is a Rockefeller outfit, and Partnership for a New American Economy is run by Michael Bloomberg (together with other billionaires and big city mayors). That doesn't mean that the study is wrong, but it seems a little odd that - like much of the rightwing - Media Matters is in the Billionaires Know Best camp.

2. The idea that comprehensive immigration reform (called around here "amnesty") wouldn't lower wages is absurd. Studies are one thing, but a much more powerful clue to what amnesty would do is offered by those who support it. Amnesty supporters include the US Chamber of Commerce, the Koch family, WalMart, Tyson Foods, and a dozens more very large corporations (some top funders of amnesty are listed here: forbes.com/pictures/ehii45geii/facebook). Top amnesty supporters are very smart and control many billions of dollars. Are they in the habit of doing things that raise wages? The U.S. Chamber is heavily invested in amnesty: do their member companies want to pay more for labor, or less? As a corollary, why is MMFA hyping a study which is clearly designed to help major corporations lower wages (and workplace standards)?

3. Reading the study and finding all the things wrong with it is left as an exercise. However, the chart below shows manufacturing jobs as a percentage of total jobs [1]. Given that sharp a decline, one would have to invite the whole world here in order to return manufacturing to its levels from the 1950s or 1960s. That sharp decline was caused by various factors, but one of the main factors is globalism, something heavily aided by the same types of people - often the same people - who now want amnesty. Those types of people harmed U.S. workers by sending manufacturing jobs offshore, now they want to further harm U.S. workers by bringing in even more competition for their jobs. It's also necessary to point out that what most people might think of when they hear "manufacturing" covers things like sweatshops rather than steel mills [2]. The study mentions Los Angeles, without mentioning that the same people who reduced manufacturing in Los Angeles now have a new way to harm American workers.

Want to do something about this? Look up those who chat with Solange Uwimana (@dcGisenyi), and then ask them questions based on the points above. Do the same with other MMFA writers: ask them why MMFA is helping billionaires and billion-dollar companies reduce wages.

Around the country, the top industries hiring manufacturing workers are, somewhat surprisingly, pharmaceutical companies and also radio and television broadcasting firms, the report said. Also on the list are semiconductor manufacturing and aeronautical and navigation equipment making.

However, workers on the ground, even the ones who have jobs, report feeling dissatisfaction.

Close to half of the manufacturing workers surveyed said they were unhappy with their current position and nearly three-quarters said that finding a job now is more difficult than it was a year ago. 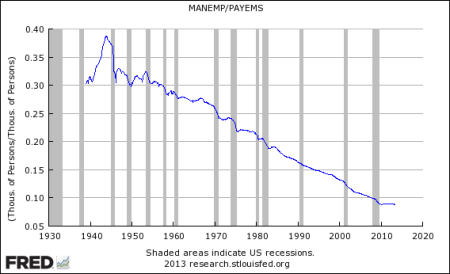