This is a companion piece to the guide to reducing illegal immigration. That page explains the "how": nuts and bolts things you can do. This page provides the background information, the "why". If you want to reduce illegal and massive immigration, it's important to understand how to do things correctly (the first link), but also to understand why I make those suggestions (this page).

The question then becomes, "how do we force the establishment to change their ways?"

On one hand, that's very difficult because the establishment has most of the power: they control the media, political parties, large sums of money, and so on.

Let me explain how to do that with the following: political leaders need a support network to have any success, and that support network can be considered to be in the form of a pyramid. For instance, Barack Obama's support network looks roughly like this: 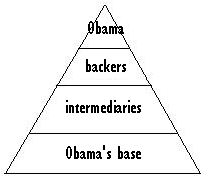 Information mostly flows down, and two unconnected layers don't usually share information. For instance, George Soros rarely communicates directly with the Democratic Party base, he does it through those intermediaries. Obama rarely communicates (except at photo ops) with either the Democratic Party base or the intermediaries, he goes through, say, people like John Podesta.

Information sometimes flows up: for instance, pundits might let the layer above them know through various means that one of Obama's plans that they've been told to sell to the public isn't sellable.

Also, if one of the layers of that pyramid collapses, the whole pyramid will be in danger of collapse. Let's say that those in the second level (Soros et al) can't find intermediaries (reporters, pundits, etc.) to carry Soros' message to the Democratic Party base. How is the pyramid going to function? Is George Soros going to assume the role of a Kevin Drum or a Matt Yglesias? Not very likely.

That gives a preview of how to oppose the "network" that supports massive/illegal immigration, and the structure of that network is similar to the structure of Obama's network. However, the pyramid is narrower and there's no known top layer [2]: 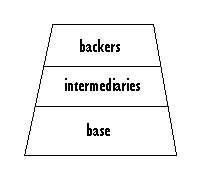 On the top level are those who stand to profit from massive/illegal immigration in one way or another: banks, businesses, top political leaders, financial backers like Soros and the Koch family, and so on. The middle layer consists of almost all of Obama's intermediaries together with intermediaries from the rightwing side of things. And, what really differentiates this support network from the other is that the base isn't that wide: few people who aren't part of the system consciously support massive/illegal immigration. Some might support it or not oppose it out of fear of being called names, but that doesn't mean that they actually support it.

For a tangible example, let's say that a business group and politicians decide to push an amnesty plan. They then communicate that plan to the intermediaries who are tasked with selling the plan to the general public. Examples of intermediaries would include Ezra Klein, Matt Yglesias, Greg Sargent, Frank Sharry, Tamar Jacoby, CNN reporters, Associated Press reporters, and so on. Their jobs are to write articles supporting the plan which will then be read and spread throughout the general public. But, let's say some of those intermediaries get strong pushback. Let's say that there's a concerted effort to discredit Ezra Klein over pushing a flawed plan. Is he going to keep selling a plan that's harming his reputation? Not too likely: few intermediaries are going to bet their entire careers on pushing a plan that's harming their careers. In that case, Ezra Klein would communicate to the layer above him that the plan isn't sellable, at least for him. If enough intermediaries felt enough heat over pushing flawed plans, there would be fewer flawed plans. As above, those at the upper layers aren't going to assume the public-facing intermediaries role: if Ezra Klein isn't willing to push a flawed plan, George Soros isn't going to step in and start writing opinion piece after opinion piece supporting it.

My goal with that (and the dozens of similar tweets I've sent to others and the dozens of similar messages I've posted on Yglesias' blog) is to publicly shame him and discredit him with the goal of a) making him do what I want, and b) send a message to those in the layer above him. The only reason that's not successful is that so few others are willing to do it. If Yglesias (or the many others who are far worse than he is) were constantly publicly hounded over supporting massive and/or illegal immigration, their careers would take a hit. If those in the Democratic Party base who read and support Yglesias realized that he supports policies that would negatively impact them, his readership and influence would diminish [3]. Like anyone else, Yglesias doesn't want his readership and influence to diminish, so he'd be forced into a corner: should he continue to support flawed policies and make his situation even worse, or should he leave promoting flawed policies to others? And, no doubt while deciding that he'll communicate what's happening to those on the layer above him.

Now, assume that Ezra Klein, Greg Sargent, Adam Serwer, Kevin Drum, The Nation, The New Republic, CNN and Associated Press reporters and so on are all in the same situation. Assume they're all pushing flawed policies and all are being discredited over those policies. Are they going to put their careers on the line to push flawed policies, or are they going to stop pushing those policies and demand that they be changed? Aside from a small number of pure ideologues and those personally involved in immigration such as for ethnic reasons, almost all intermediaries are going to put their careers first. And, that will leave those in the top layer out of luck: as above, George Soros isn't going to start penning a series of pro-amnesty editorials.

For literally thousands of examples of me putting the above into practice, see most of the posts here (start on the topics page) and see my Twitter feed: @24AheadDotCom_ . The latter covers many more topics than are covered here and is much more informal, but large numbers of my tweets have the goal of discrediting and shaming intermediaries to reduce massive/illegal immigration. Some others do that as well, either on Twitter or in the comments sections on blogs and the like. However, most who oppose massive/illegal immigration in such venues do things that aren't that effective such as just participating in an echo chamber or concentrating on the illegal aliens themselves rather than the intermediaries. Instead of doing that, please spend the same time helping me discredit and shame the intermediaries.

And, for specific things you can do, see the guide.

[2] It's highly doubtful whether there's a "Moriarty" or even just a small group of people pulling everyone else's strings on illegal/massive immigration. It's also not at all productive to find out whether there is one or not or to engage in speculation about it. You'd never know for sure and speculating about it just plays into the hands of the intermediaries: they'll use your speculation to portray you as a conspiracy nut. It's also not necessary as described in the rest of the post.

[3] I sent over a dozen tweets about Van Jones' "Contract for the American Dream". Some were to him and his organization, others were to intermediaries that promoted the plan, but there were also two or three tweets that I sent to non-intermediaries who had retweeted Jones' plan. The goal of the latter was to separate Jones from his base. Likewise, I've sent several tweets like "there's little fundamental diff btw #MoJo & #Koch Bros. on #immigration" (referring to Mother Jones and the Koch family) to non-intermediaries who'd retweeted MoJo's articles supporting massive/illegal immigration with the same goal of separating them from their base.