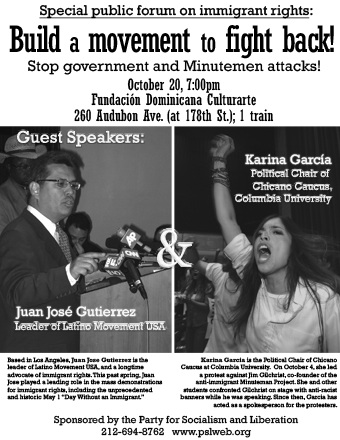 Juan Jose Gutierrez is the director of Latino Movement USA, and NBC News featured him as a spokesman for the Hispanic community last month. A week before then, he was a featured speaker at a public forum sponsored by the "Party for Socialism and Liberation". The flyer for that is to the right, and a description of the event is here. Note that the other featured speaker was Karina Garcia, the Political Chair of the Chicano Caucus at Columbia University (columbia.edu/cu/chicanocaucus).

Did NBC News know about this? Perhaps they did, but they were convinced to run the segment without identifying his underlying beliefs because of his links to the SEIU and Los Angeles mayor Antonio Villaraigosa.

Maybe after airing that report they also found out about the Los Angeles branch of that party holding their 3rd annual "Socialism Conference" on November 11:

...The day will begin with a focus on fighting the capitalist offensive, including the meaning of the capitalist mid-term elections; immigrant rights and the case for amnesty; fighting the Minutemen and right-wing attacks; Black liberation and socialist struggle; and the struggle against racism, sexism and homophobia, and for working class unity...

Surely, the crack researchers at NBC News discovered this.

And, just as surely, they've read the article "Latinos Threaten to Take to the Streets":

Tuesday US Latino organizations threatened to carry out mass demonstrations on the streets of the United States if Congress refuses to take actions favoring immigrants.

[The executive director of the DC chapter of the Central American Resources Center (CARECEN-DC) Saul Solorzano]* urged for an all-embracing migratory reform to authenticate 11.2 million people with no identity papers.

We'll wait 110 days [for the new Democratic Congress], if in that time the legislative body does not act, "we will," he warned.

...USA Latino Movement director Juan Jose Gutierrez expressed his opposition to Congress and White House propaganda for their interests to the detriment of immigrants.

One of the points on the Democrats agenda will be modification of the US migration laws, which House Democratic leader Harry Reid called a failed system.

Nancy Pelosi, who will be first female House speaker, hopes to reach a bipartisan accord on this topic.

*In the article, he's refered to as "Central American Resources Center executive director Raul Solorzano", but his first name is actually Saul.

Jeebie is dead on the money, but the fact is the mass deportations will come when the mexican government has total power over this non nation and whites will go at gun point, black who think that movement is great will just be shot in place.

Juan Jose Gutierrez( Read bin laden lover ) is nothing but a little brown Red, his real ideals are with mexico city and he hates your freedoms and wants all non hispanics dead,dead,dead, did you know what he did on 9-11 in mexico city?

Migratory reform? O.K., ZERO. Bipartisan agreement? O.K., Congress listening to the American citizens for a change. Mass demonstrations? Great! Makes it easier for the ICE/border patrol to round you up for the mass deportations. Also helps point out how little your real "contribution" means to America. Go on strike forever. No one will notice or care.