From the study "Producing superstars for the economic Mundial: The Mexican Predicament with quality of education" by Lant Pritchett and Martina Viarengo (Harvard University, John F. Kennedy School of Government, November 19, 2008, PDF at peekURL.com/zp677t8 ):

We examine how many students Mexico produces per year above the "high international benchmark" of the PISA in mathematics. While the calculations are somewhat crude and only indicative, our estimates are that Mexico produces only between 3,500 and 6,000 students per year above the high international benchmark (of a cohort of roughly 2 million). In spite of educational performance that is widely lamented within the USA, it produces a quarter of a million, Korea 125,000 and even India, who in general has much worse performance on average, produces over 100,000 high performance in math students per year. The issue is not about math per se, this is just an illustration and we feel similar findings would hold in other domains.

A chart comparing the rate per thousand is below. Note that India uses a different testing system which was adjusted to make it similar to the other testing systems in the chart.

A few things to note:

1. Allowing millions of Mexican citizens to move to the U.S. results in lowering the U.S.'s abilities in math (and other subjects). For corrupt demagogues (such as almost all leaders of the Democratic Party and several in the GOP) that's a good thing, but it has very serious long-term implications for the rest of us.

2. Mexico simply can't afford to lose any smart people. For instance, NPR recently broadcast a story about a Mexican illegal alien who became a brain surgeon at Johns Hopkins University. What NPR didn't reveal is that that automatically means that Mexico has one fewer citizen who's capable of becoming a brain surgeon. Those who support skilled immigration are causing problems for U.S. citizens, but they're also harming the Third World by depriving struggling countries of the smart people they need. 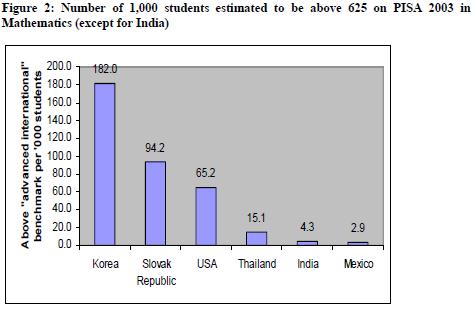