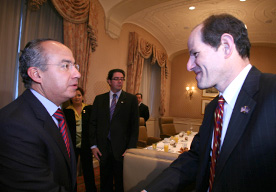 Mexican president Felipe Calderon visited five U.S. cities this week, and had 34 events scheduled with a wide range of movers and shakers (his wife had a few events also). Some of the dignitaries he met with are listed here; picture right is of him with New York governor Eliot Spitzer from presidencia.gob.mx/prensa/?contenido=33715

Your must-read link is this roundup of his visit, with a few quotes from him congratulating Spitzer and others for their help. And, your takeaway is from this:

At every stop, he has scheduled meetings with top local and state officials, some of whom have direct links to presidential candidates.

In his speech to the California legislature (which includes several Democrats with obviously divided loyalties), he said that "I strongly believe that Mexican and Mexican-American workers are a large reason for the dynamic economy of California", which is certainly true. It's also true that millions of illegal aliens from Mexico have a very negative impact on the state and the country, but he didn't bring up the downsides. He also promoted changing illegal immigration into (massive) legal immigration. From this, he gave a shout out to the Bracero program and also said:

We need to make migration legal, safe and organized.

Are they all reading from the same script?

Without specifically directing audience members to pick up the phone and call their congressmen, Calderon also hinted that a key component to ensuring a strong future for Mexico lies in the pressure Mexicans here can apply to U.S. leaders, arguing that the improvement of Mexico is a joint government venture.

One of the major costs he didn't discuss is that massive immigration from Mexico gives that country political power inside the U.S., as evidenced by a foreign leader urging Mexicans and Mexican-Americans to promote Mexico's agenda to U.S. leaders. Obviously, the agendas of the U.S. (but not necessarily our elites) differs from that of Mexico in major ways. In the case of conflicts, whose side would former immigrants from Mexico come down on?

UPDATE: Aurelio Rojas of the SacBee offers this, in which he says that Calderon said "Mexican American workers are a large reason for the dynamic economy of California"; in fact, that was actually "Mexican and Mexican-American workers..." He also said:

But after the speech, Republican Sen. Tom McClintock of Thousand Oaks said it was "inappropriate" for Calderon to "lecture" the Legislature about U.S. policies. "I don't think it's any of Mexico's business what America does with its own immigration policy, just as it's none of America's business what Mexico does with immigration policy," McClintock said... Assembly Speaker Fabian Nunez, D-Los Angeles, who spent part of his childhood in Mexico, said McClintock did not have "a valid argument.".. "Any president of any nation has a right to their own point of view," said Nunez, who praised Calderon for his efforts to improve Mexico's economy and stem illegal immigration.

Calderon is entitled to his own POV, but whether he should be given a stage at the California Capitol is another matter. It's not surprising at all that Nunez would defend him.

And, whereever Calderon went he was greeted by some number of Mexicans protesting his pro-business policies; some pictures from Chicago here, which mentions another one of those unmentionable costs of massive immigration from Mexico:

why are we allowing the internal politics of a foreign country to play out within our borders?

And, speaking at a winery founded by a Mexican immigrant, Calderon used another stock term, referring to illegal immigration as a "phenomonon", as if it were the tides:

"We came to be here with you to defend thousands of families of Mexican workers that are here because of a natural phenomenon, that compliments the economy of the U.S. and the economy of Mexico. If we want to seek prosperity for our cities we have to have this prosperity together."

UPDATE 2: Tom Tancredo has sent a letter to Calderon. An AP report on Los Angeles mayor Antonio Villaraigosa meeting with Calderon is here; per the comments, the L.A. Times doesn't seem to have reported on their meeting. The latest they appear to offer featuring both is a short report from Nancy Vogel (link), which doesn't mention anything that the reports above don't cover. The only artifact they provide from their meeting is this photo, captioned "Los Angeles Mayor Antonio Villaraigosa, left, and Mexican President Felipe Calderon discuss trade opportunities in downtown Los Angeles":

On the night of Feb. 13th, meeting with LA Mexican leaders, Calderon discussed the formation of a "league of anti-defamation and anti-discrimination," modeled on the Jewish Anti-Defamation League, to protect Mexicans in the U.S... Quoth Calderon, "If anyone is mercilessly defaming, ridiculing, and exacerbating hatred against Mexicans, all of us need to neutralize that force."

That links to this, which says that he said that just as the Jewish community had their league, he hoped that Mexicans would have their own. It also includes another picture of our favorite collaborateur:

Did you notice there is nothing about Calderon meeting with Tiny Villar last night in today's LA Times? A president of a hostile foreign invading enemy of this country meets with a treasonous reconquista mayor, and the LA Times chose not to cover the story. Un-fucking-believable.

Right you are, petit bourgeois. And foreign agents and lobbyists are required to register. Guess that makes Calderon just another undocumented alien. Kind of a habit with our 'allies' south of the border. http://www.lobbyinginfo.org/laws/page.cfm?pageid=13 Will somebody please deport Calderon, ASAP? Bush? Condi? (crickets)

Bravo to Sen McClintock!!! It's about time a politician spoke up and told Calderon to shut up and mind his own business. Of course the liberal/Mexican Nunez has to weigh in to defend Calderon. It's too bad that he didn't spend his entire life where he was born.

LW, give us your theory about the media blackout towards Alcalde Tiny Villar meeting with Harvard Felipe, por favor. We need to know when treason is being committed on the public record and in our bathroom of Los Angeles in the Getty House, but where is the public when they need themselves? The public demands your diligence now. Gracias. Also, we have to stop Juan McCain. Emphasize his use of the term "gook" when referring to his captors before he underwent pussification. Paint him as the old senile anti-white racist he is.

'The new bill, the Safe, Orderly, Legal Visas and Enforcement Act of 2004 or SOLVE Act.' I think that was the ultimate. I wonder who first coined 'safe, orderly'? 'Willing workers'? 'Our immigration laws are broken'? 'Jobs Americans won't do'? In most cases, not Bush (or his speech writers). I'm guessing it's groups who put out carefully worded press releases and literature which eventually get picked up. I'll go with National Immigration Forum & Frank Sharry. He's on every panel, including 'They also wanted their proposals to respond to reality. The panel's report calls on the U.S. and Mexico to craft a "grand bargain" that would be mutually beneficial, make migration safe, legal, orderly, and predictable, and decrease migratory pressures over time.' http://www.carnegieendowment.org/events/index.cfm?fa=eventDetail&id=273 "This bill will, over time, replace a chaotic, deadly, and illegal flow of exploitable workers and desperate family members with a safe, orderly, and legal flow of workers with full labor rights and family members with legal immigrant visas," said Frank Sharry...

So illegal alien loving Jewish governor Spitzer is meeting Calderon. Spitzer might want to talk to the ADL, since here is what they report [1]: THE FINDINGS IN BRIEF...STRONGLY ANTI-SEMITIC: 17% OF AMERICANS, 35% OF HISPANICS, 44% OF FOREIGN-BORN HISPANICS, 20% OF HISPANIC AMERICANS BORN IN U.S. One might add: uhh, consider the source.

"Human beings should be treated as human beings," Mr. CalderÃ³n told a group at Harvard University, acknowledging that his country has to do more to improve its relationship with Central American immigrants. Sorry, Felly (a Technotronic reference), you can't say that and all your human rights lecturing and then applaud Bracero and guest worker programs. They're specifically designed NOT to treat people as human beings with full rights.

'It is a story of heroism, because it is not easy to leave behind one day your land, home, and your Fatherland and to cross the border risking all.' Yeah, that really sounds like he doesn't want his people to leave Mexico. Am I really seeing this? Did he just call people who violate American law heroes and did he actually say this IN the U.S.?

Hes there EVER been a beaner in US politics who voted pro American? I can't think of any. It's always the same thing day in and day out from this group of anti American politicians.......pro beaner.

.....and the LA Times chose not to cover the story. Oh like anybody other than an ex-LA Times staffer reads the Times.

Half of LA is functionally illiterate. This is the future of a once great city.

'What you must understand is that a treasured aspect of our national foundation is a respect for the rule of law. Perhaps if corruption were not so widespread and commonplace in Mexico, it would be easier for you to understand this.' Oh my gosh, an American politician lecturing the Mexican president the way he lectures us! Someone forgot to tell Tommy it's a one way debate amongst their politicians and ours. We're just supposed to listen, not respond. Similarly, when it comes to expressing an opinion on this important policy issue, their side can say anything it wants (fine) but if you express mere doubt about their open borders orthodoxy, you will be attacked and labeled (based on the single editorial below, in order): loud, nasty, simplistic, foaming at the mouth, in the feverish grip of nativism, and unrealistic. And these people accuse the OTHER side of 'poisoning the debate'!? They clearly don't want a debate and try to stifle it with their smear tactics and intimidation under the sanctimonious guise of 'stopping the hate'. http://www.shns.com/shns/g_index2.cfm?action=detail&pk=SCHRAG-02-14-08

I will only say its the start of the war when drug dealers are telling you what you must do. Calderon is our enemy and once more get out of the cities asp or become a new jew inside a mexican death camp. 3947857298jdjud738389 fine that one CIA