2010 Elections: Tea Party wins some, loses some, does somewhat less damage than feared

In the 2010 elections, Republicans who were backed by the tea parties ("TP") won several races but some of the major TP candidates lost. The GOP landslide was very large on both the national and state levels, and apparently exit polls showed 4 in 10 voters expressing support for the TP movement. However, those who voted skewed older; more younger people voted in 2008.

Below is a list of some of the races, followed by a discussion of what to do.

* Mark Kirk won in the most important race in the U.S., considering who was kept out of the Senate. Needless to say, the TP "patriots" largely ignored that race and couldn't make the grown-up choice.

* Tom Tancredo lost for Colorado governor. If the TP "patriots" had dropped Dan Maes and had supported Tancredo, he might have been able to squeak by.

* Jan Brewer won by a wide margin; recall that she wasn't elected governor but assumed the position after Janet Napolitano moved upstairs.

* Sharron Angle lost in a clear repudiation of the TP philosophy and also of her fringe ideas. If - as I repeatedly suggested to her and her advisors via Twitter (example: twitpic.com/2rytur ) - had dropped the libertarian lunacy and had concentrated on things like the anti-American DREAM Act she could have won.

* Carly Fiorina lost, in part due to outsourcing.

* Christine ODonnell lost in Delaware. While she has some good features, her libertarian-leaning economic lunacy isn't one of them. In the same state, TP favorite Glen Urqhart lost a House race.

* Marco Rubio won. While he's fairly good on at least illegal immigration, he strongly supports legal immigration. And, he's at least an associate of the Jeb Bush/George W Bush circle. Expect the GOP to use him as a token and to push massive immigration in coming years.

* Pat Toomey - formerly with the Club for Growth - beat Joe Sestak in Pennsylvania. Toomey is from the "Profits at Any Price" school; expect him to support massive immigration, outsourcing, and free trade no matter the cost to Pennsylvanians.

* In addition to Rubio, Florida is apparently all red. Billionaire Rick Scott - a TP favorite - is their new governor.

* TP nut Joe Miller appears to be losing to Lisa Murkowski. Erich Honecker could not be reached for comment.

* Another TP nut, Rich Iott, is losing to Marcy Kaptur with 41% of the vote.

* A TP nut, Allen West, did win despite affiliation with an alleged criminal biker gang.

* TP favorite Ken Buck - someone who might have been good on immigration - lost to Michael Bennet for Senate from Colorado.

* Rep. Raul Grijalva is barely leading Ruth McClung in Arizona. If she didn't have TP-style fringe economic ideas and simply concentrated on how Grijalva encouraged a boycott of his own state and more or less represents the interests of the Mexican government she'd probably be doing a lot better.

WHAT TO DO:
As should be obvious by now, I'm not a tea parties fan. That's not going to change, and I'm not going to pretend to be one either. Not all of the Republicans listed above are associated with the TP movement, but those who are steeped in that movement should be opposed as with the movement itself.

And, the way to do that really isn't that difficult: simply make a good argument against libertarianism, whether the full version or the lite version espoused by the teapartiers. And, encourage the Democrats to make real arguments instead of playing the race card and thinking that calling people names is an argument.

That said, the vast majority of Americans are reasonable and aren't anywhere near as insane as some of the TP candidates listed above. Things will shake out and even out as they see just how badly the TP candidates govern. A majority of people might say they prefer a smaller government with fewer services, but we'll find out how little that means the first time a TP candidate tries to touch their entitlement programs. At that point in time, adults might step in to save the day.

UPDATE: Per MSNBC - thus a note of caution - just 32% of those they identified a Teaparty candidates won (link). That might sound high for a third party, until you realize that all or almost all of those were running as Republicans. In a year with such a broad win for the Republicans, you'd expect much more than a third of their candidates of a certain type to win, unless, of course, that type is "teapartier".

Of all the possible changes to come out of the election, the biggest potential shift in immigration policy will probably come from which party controls the House. Now that change is official: Republicans will lead the House, meaning immigration legislation will be in the hands of likely Speaker John Boehner (R-Ohio) and Rep. Steve King (R-Iowa), who will chair the immigration subcommittee.

A new Rasmussen Reports national telephone survey finds, in fact, that 59% of Likely U.S. Voters think it is at least somewhat likely that most voters will be disappointed with Republicans in Congress before the next national elections. That includes 38% who say it is Very Likely.

11/4/10 UPDATE: Sen. Patty Murray (of Obama's day care centers fame) has won re-election in Washington (link). She beat Dino Rossi who was endorsed by TP groups but who at least part of the time didn't return the favor. 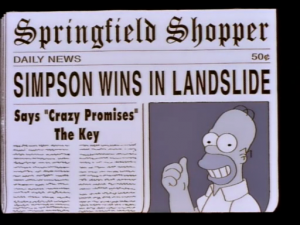