For the benefit of those in the Occupy Wall Street movement, I'll explain how this is the work of incompetent, ineffective, astonishingly stupid lil' fascists below:

That isn't to say [the Occupy Iowa Caucuses movement] aren't trying to disrupt the candidate events going on around the state this week. On Wednesday, five aggressively interrupted a Ron Paul appearance, including a 16-year-old girl who forcefully ripped down the Paul signs that the Texas congressman's supporters put up to block her. (In response, Paul, who has offered qualified support to the occupy movement, commented on how "wonderful" he finds freedom of speech.) Seven occupy protesters were arrested at Mitt Romney's Des Moines headquarters the same day, where they were protesting the candidate's ties to nearby Wells Fargo bank, and five were arrested Thursday at Paul's campaign headquarters, where they were protesting Paul's proposal to eliminate the Environmental Protection Agency.

[Ed Fallon, a radio host and former Iowa Assemblyman who has emerged as one of the leaders of the movement in Iowa] said the movement simply wants to "call them out" - both Republicans and Democrats - for ignoring the needs of the many to favor the wealthy few.

"The opposition is trying to characterize the movement as a bunch of disgruntled renegades who are unwashed and uninformed," he said. "It's a game they're playing to hype up opposition to what the movement is all about."

2. Occupy Iowa Caucuses' rejection of core American concepts isn't even effective. In fact, the Question Authority plan is not only completely consistent with core American concepts, but it would be far more effective than what the Occupiers have in mind. Instead of trying to shout down their opponents, the Occupiers would recruit smart people to engage their opponents in real debate. All the candidates are quite reachable, and it wouldn't take much to show how any of them are wrong about a multitude of subjects. A smart questioner showing a presidential candidate wrong on video for Youtube could have a devastating effect on that candidate's chances at winning the Caucuses. Yet, making that happen is something that Occupy Iowa Caucuses and Occupy Wall Street in general aren't willing to do and aren't capable of doing even if they were willing.

1/1/12 UPDATE: I added a video of the Occupiers being kicked out of an Iowa coffee shop. After two days it has over 130,000 views and (for what it's worth) a scan of the comments shows that the great majority oppose how the Occupiers do things. Note that the gentleman with the beard does not appear to be Ed Fallon but someone else.

1/1/12 UPDATE 2: The latest from the far-left edge of the bell curve comes from Will Storey of the New York Times (link):

Ten arrests, including those of the teenagers, were made outside of Representative Michele Bachmann’s headquarters, the first of five stops made by the protesters and the only one where the targeted candidate was actually present. Five protesters were arrested at the Gingrich office and three more at Rick Santorum’s. The police, who did not hesitate to make the arrests, were waiting at nearly every location. As the day wore on, their patience was clearly wearing thin.

Clarke Davidson, 28, taunted the police at the first three stops, dancing and waving a sign that said “End the Fed” at them and then scampering away if they approached. While he stood motionless in front of Mr. Gingrich’s office, two officers grabbed him by the arms and took him away. One of the officers, who had been the victim of one of Mr. Davidson’s taunts earlier, smugly asked “Hey, how are you?” before zip-tying his hands...

...One of the teenagers who was arrested, Heaven Chamberlain, 16, had been arrested, with her mother, once before at an Occupy event at the state capitol building on October 9. She considers her rap sheet to be lines on her résumé. “It shows that I’m active with the community,” she said, “and that I care about people’s opinions.” She added that she planned to run for president in 2036 (Ms. Chamberlain will be of legal age in 2032, but hopes to gain experience in the Senate).

The story includes an arrested protester crying like a baby, complete with a presumably fairly expensive, foreign-built camera around her (or his) neck. Some aspects of the OWS movement are somewhat valid. However, they've constantly shown that they aren't that smart, that they have emotional problems, and that they don't respect the rights of those with whom they disagree. Just like the Tea Parties, they're having a very loud, very public tantrum and achieving little beyond helping those they present as their opposition. If the elites had a plan to create a fake opposition, they couldn't have come up with a better group than OWS. 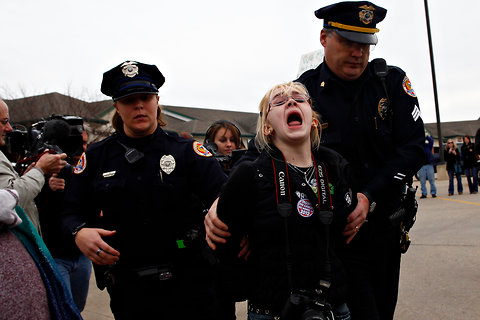