Yesterday in a speech to farmworkers in San Luis, Arizona Buffett enabled illegal immigration, supported guest workers programs, and supported amnesty. And, he capped it off by raising his fist and shouting "Viva Mexico!" (image below)

But, wait, there's more: in 2000, Buffett received the highest honor the Mexican government bestows on those who help that government push their agenda outside their country.

A lack of recognition of the contribution of migrant farmworkers and a dysfunctional immigration policy are creating a shortage of labor in this country and are leading to billions of dollars of crop losses, philanthropist Howard G. Buffett said Saturday.

..."[Buffett said:] We all know that supermarket shelves, from California to New York, are filled thanks to the work of all of you... It is very frustrating to see that the work, the commitment and the sacrifices that you make for this country are not recognized"...

...In a speech following a prayer led by Bishop Gerald Kincanas of the Tucson Diocese, Buffett said that in states such as Michigan, Georgia and Nebraska, agricultural production valued in the billions of dollars is going to waste owing to a lack of labor created by stiffer immigration regulations.

"There is a huge disconnect of reality in the immigration debate. The issue of migrant farmworkers is a separate issue. They are a separate class, and they should be appreciated and recognized for what they do for our country and its food system."

...In an interview, Buffett stressed the need for lawmakers to fix the nation's immigration policy to meet the needs of the nation's agricultural industry.

Otherwise, he added, "in a few years will see the production leaving the country for lack of labor, because the major part of the agricultural industry depends on that labor. We need to have an immigration policy that works to meet those needs. The current policy does not work."

Buffett - who in 2000 received the highest honor Mexico bestows on foreigners, the Order of the Aztec Eagle - said migrant farmwokers must be treated as a separate issue in the immigration debate.

"I don't know an American who gets up at 4 in the morning to line up to cross the border, to go do one of the hardest jobs that exists, then returns home to take care of the family. They are not taking jobs from anyone in the United States. They are not the same as the other immigrant workers."

Does Buffett enable illegal immigration? Of course. He's not demanding that farmers only use legal labor, instead he's scaremongering about their need for even more labor. And, in the current situation, the bulk of that would be illegal labor. Buffett's chief of staff says "Howard Buffett does not support illegal immigration", so perhaps he just isn't smart enough to figure out what he is in effect supporting.

For the downsides of what Buffett does openly support, see comprehensive immigration reform and guest workers.

For what Buffett is not supporting, see my plan to get able-bodied unemployed Americans doing temporary farm jobs.

I'd like mostly American farmworkers, working under good conditions for good wages. I'd also like to encourage farm automation, rather than the current situation where it's discouraged.

That's not the situation Buffett is supporting: he spouts the jobs Americans wont do canard in order to enable what - in practice - amounts to foreign serf labor being brought in to do difficult jobs at low wages under usually bad conditions.

For more on the "phony farm labor crisis", see this and the crops rotting in the fields entries.

And, please take a moment to let Buffett and his chief of staff know what you think: @hbuffett and @annkelly411. 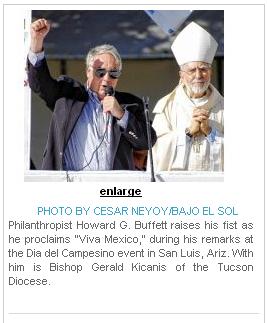