Posted Sun, Dec 14, 2008 at 3:37 pm
California governor Arnold Schwarzenegger has launched a program called "Bank on California" that seeks to give bank accounts to 100,000 of the "unbanked": those who currently don't have either a checking or savings account. However - right on their front page (bankoncalifornia.ca.gov) - the program states that it accepts as ID the Mexican government's Matricula Consular card, a form of identification that's basically only of use to illegal aliens.

In brief, Arnold Schwarzenegger and the state of California are actively helping banks profit from money that was earned illegally.

This scheme was previous promoted by Schwarzenegger and Bill Clinton in a dishonest Wall Street Journal guest editorial that didn't mention that one of the major beneficiaries (in addition to the banks) would be illegal aliens. Note that Gavin Newsom and Tom Ammiano promoted a similar pilot program in San Francisco, which I predicted would spread to other cities. It was later considered for the East Bay, and now it's gone statewide. And, once illegal aliens become customers of corrupt banks, those banks are going to fight attempts to deport a profit center; see Western Union's past activities for a preview.

Many forms of ID are accepted, including passports, California IDs, Mexican Matricula cards, and more.

In addition, participating banks and credit unions accept the Mexican Matricula and the Guatemalan Consular identification cards. Some may also accept other Consular ID cards.

And, there's no mention that this will be open to illegal aliens on their press release (link):

With the support of former President Bill Clinton and joined by elected officials from across California, Governor Arnold Schwarzenegger today launched Bank on California, making California the first state in the nation to launch a program designed to help Californians without checking or savings accounts open starter accounts. With the goal of opening 100,000 bank accounts over the next two years, the Governor has partnered with city mayors, community groups, Bank of America and other financial institutions, the FDIC, and federal and state regulatory agencies to put this innovative plan into action - bringing California's unbanked the opportunity to gain access to lower-cost sources of credit and financial services, establish savings, build credit history and invest for the future...

Spearheaded by Governor Schwarzenegger and funded by non-profits and coalition organizations, Bank on California is a collaborative voluntary program based on the partnership of city mayors, community groups, financial institutions and state and federal bank regulatory agencies. The cities of San Francisco, Los Angeles, San Jose, Fresno and Oakland are the first wave of California cities joining Bank on California today - with other cities to follow. At the press conference, Sacramento Mayor Kevin Johnson announced Sacramento will be the next city to begin structuring the program. The Governor also announced that more than 32 financial institutions, 75 community organizations and 450 coalition members have joined Bank on California - and that Bank of America will offer the starter accounts in all of its California branches...

...state and federal bank regulatory agencies will assure financial institutions are in compliance with banking laws, encourage institutions to meet their obligations under the Community Reinvestment Act (CRA) and highlight the fact that institutions will receive positive consideration under CRA for offering low-cost bank products and services...

UPDATE: From their press release (link):

At an event today in California, The Pew Charitable Trusts' Safe Banking Opportunities Project joined Governor Arnold Schwarzenegger, California mayors and banking officials in announcing a new statewide program to bring more of the state’s residents into the financial mainstream. The state's "Bank On" initiative aims to connect the "unbanked" - households without bank accounts - to appropriate, more affordable accounts that help lower their financial transaction costs and put them on the path to building savings and assets.

..."Pew is honored to work with Governor Schwarzenegger and mayors from across the state to bring working Californians without bank accounts into the financial mainstream," said Rebecca W. Rimel, president and CEO of The Pew Charitable Trusts. "Bank On California will help many families save money by accessing basic financial services with lower fees others may take for granted. This is the largest effort of its kind and is an excellent model for states across the country."

Now is the time to make sure that they can't take this to other states.

And, if anyone would like to look into any links the directors of the Pew Trusts have to banks, leave a comment. 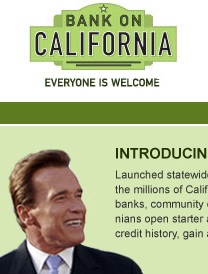 Of course this is just more of the same idiocy that got California in the mess it is in now. "AhNold " is a jackass and as corrupt as that Mayor "VillianGROSSa". With their continued leadership their state will eventually slide into a poverty that rivals that of Mexico.....(just relocated.)

This is NOT in the best interest[s] of legal California citizens and in my eyes is nothing short of treason. WTF is it going to take to get a GD politician to look out for their own people? This is just absolutely infuriating.

Cimmit a crime, get a government grant. Do the democrats (yes, Arnold is a Kennedy democrat) realize this is why the world considers them stupid. Europe is not supporting the democrats, they are setting them up for a fall. Meanwhile at my age I can sit and laugh as the rest of the country commits suicide. I"ve let my children/grandchildren know that 'the chosen one' is none of my doing. I can see the educated elites when the public works con hits the ground. A masters degree just might get you a job at making gravel out of big rocks, with a sledge hammer. The boss will be those poor uneducated souls who know how to run equipment and build things.

The people with cash are targets for state taxation, not civil rights or "Social Justice".

Perhaps it's pointing out the obvious, but... You're up against political correctness here -- everyone knows the vast majority of the "unbanked" are non-white. And Schwarzenegger is himself an immigrant; if he did not support such programs he'd be labelled 'anti-immigrant' by people he has so far shown he does not have the guts to consistently stand up to.

before you know it, they will start giving these criminals mortgages. oh wait, that already happened, thus the subprime lending mess we are in. what kind of stupidity is this?

Soon we will be able to give this land back that we stole. Only the Democrats will be allowed to stay here. The religious, greedy, self righteous will have to go. Maybe we will send them to the middle east, and they can hang out with their jew friends. We will get rid of the corporations, and give back all the money to the poor that they have stolen from us. This new banking system will allow the the money to be given to the ones that deserve it. Not the greedy filthy rich who stole it.

i think there is a socialist or commie amoungst us?

its over! say hi to the new world order,

i think there is a socialist or commie amoungst us? Leave it to Beaner Not at all Beaner, actually I was being sarcastic. But, this how I feel a lot of people in this country are starting to think. Things happening like this banking system pisses me off. I think Fred Dawes, comment above is about right on the money. I use to think a lot of people were going over board back in the early 90's about this New World Order. Not so much anymore. And after Bush, it may get here a lot sooner. And before you go and start thinking I am a Bush hater I voted for him both times. I'm not a supporter of him ether. He has turn out to be a lousy President, and I look at the other two choices we had and wonder how bad it could have been with one of them two idiots in charge, and shake my head in disguise. And no I didn't vote for Obama ether. I hope he does a good job, but my gut tells me that's not going to happen.

mary is right, keep thinking TheBad, and just keep your head in the years to come much evil will happen.

Check out the article: "Bank on California" Money Laundering Scheme May Do for the State What Mortgage Meltdown Did for the Nation http://www.americanchronicle.com/articles/view/86058