All in with Chris Hayes isn't diverse, despite his race obsession (MSNBC)

Chris Hayes of the new MSNBC show "All in with Chris Hayes" has a quota system: few white men need apply ([1]).

However, despite Hayes' obsession with race, his show is like other TV news shows in that it's woefully lacking in diversity, as will be described below.

The picture below is a Media Matters for America chart that Hayes trumpeted to prove he's more diverse than others, and he recently crowed to the Columbia Journalism Review that he uses "hard quotas" (cjr . org/realtalk/chris_hayes.php):

"We just would look at the board and say, 'We already have too many white men. We can't have more.' Really, that was it," Hayes says. "Always, constantly just counting. Monitoring the diversity of the guests along gender lines, and along race and ethnicity lines." Out of four panelists on every show, he and his booking producers ensured that at least two were women. "A general rule is if there are four people sitting at table, only two of them can be white men," he says. "Often it would be less than that."

Sounds plenty diverse, no? Except, it isn't. Hayes is obsessed with skin color, but isn't trying to be diverse in other ways:

* Regional diversity: won't most of his guests be from the New York-DC corridor?

* Cultural diversity: any chance Hayes is going to feature guests in the Ted Nugent mold? There are lots of subcultures in the U.S., if you've got a few hours to spare list all the many subcultures that won't be represented on Hayes' show.

* Educational diversity: won't almost all of his guests have college degrees, with many having Masters degrees or higher?

* Past class diversity: won't the great majority of his guests be from comfortable upper middle class backgrounds?

* Relationship to working diversity: won't almost all of his guests either be entrepreneurial types (such as book authors) or be working for the government or private institutions? Will Hayes be having many store clerks on his program?

* Careerist diversity: won't almost all of his guests be strivers and careerists, trying to build a name for themselves in order to climb up the ladder?

* "Partisan diversity": won't almost all of his guests belong to one party or another, with almost all of them hewing to the party lines of either the Democratic Party or the GOP?

* "Popular diversity": won't almost all of his guests side with the establishment on important topics such as immigration and trade? Will Hayes be having a lot of people on who truly oppose free trade, globalism, and massive immigration? Will we see a lot of attrition supporters gracing his show? Hayes' other job is writing for The Nation; that magazine is headed by Katrina vanden Heuvel, a proud member of the CFR. Think we're going to see a lot of anti-Rockefeller talk on All In With Chris Hayes?

Chris Hayes' show is diverse where it matters to him: one-upping his fellow SWPLs. However, it's not in any way diverse in the real world and in ways that really matter. 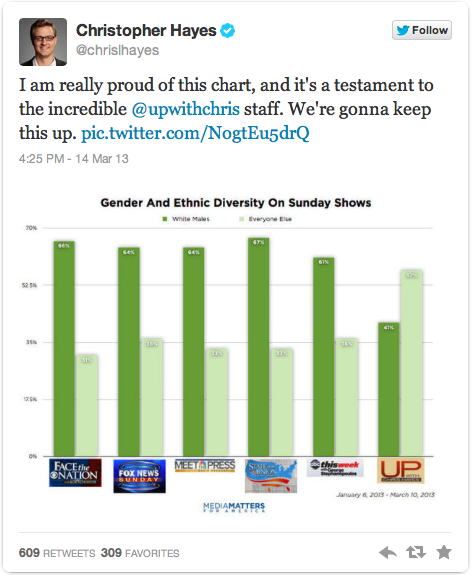