The stupidity of the tea parties rolls on, at much reduced rate

1. Over the weekend, there were apparently just three "parties": Buffalo; Stamford, Connecticut; and Essex County, Massachusetts.

2. The aftermath of the one in Essex County is promoted by Glenn Reynolds at pajamasmedia.com/instapundit/75093 and pajamasmedia.com/instapundit/75109. About a hundred people showed up. The Congressman for that area appears to be John Tierney, a Democrat. In 2004, he got 213,000 votes and his GOP opponent got 91,000. That means that the 100 people represent 0.05% of the votes he got, and 0.1% of the votes his opponent got. I'm sure he's scared out of his wits.

3. The tea partiers' tantrum is revealing a bit of a persecution complex, as Insty (pajamasmedia.com/instapundit/74907), Eric Odom (taxdayteaparty.com/2009/03/florida-gov-shuts-down-tea-party), and some others try to make a big deal about Cape Coral, Florida cancelling a planned event. Many of them link to this which they apparently didn't read:

WINK News spoke to the director of parks for Cape Coral. He says that even now if [the original organizer] is willing to get insurance for the event he'll likely re-authorize it.

Since that time, FreedomWorks (freedomworks.org/blog/bstein80/cape-coral-tea-party-is-on) apparently bought insurance and filled out the forms or similar. Requiring permits for marches and the like is a very standard practice; cities can abuse those rules and if they do they should be sued. However, that's apparently not the case here: the city had reasonable demands that the original organizers didn't want to abide by. The fact that it's back on should indicate that there really was nothing to this story to begin with.

It also illustrates that those promoting the protests have to resort to drama queen actions or are completely unaware of how things like protests work. 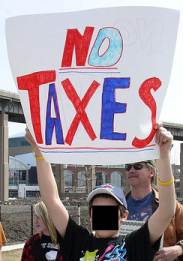