Via this we learn that a Santa Monica lawyer named Henry Reynolds has apparently registered imwithfred2008.com, a take off on the real Fred Thompson site imwithfred.com. It apparently featured Klan imagery or statements in an attempt to smear Thompson to those who mistakenly entered the wrong URL. That lawyer is apparently the same Henry Reynolds who's donated to John Kerry and moveon.org. Whoever owns the domain has since enabled cloaking.

And, they've also redirected it to John Edwards' site. To a certain extent.

If you go here and enter the address, you can see that it goes through a few 302 redirects before displaying Edwards' site in a frame. The meta information, however, remains: 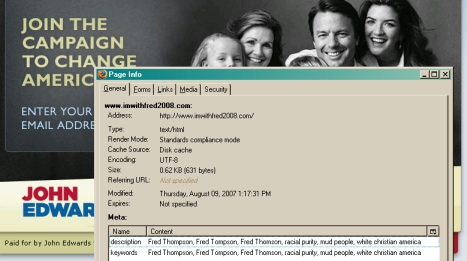 Who knew that John Edwards stands for "racial purity"? I guess we better get him on the line to confirm that, eh?