Earlier today, Garance Franke Ruta of The Atlantic conducted a live chat and continually evaded my attempts to ask about the negative impact that Obama's amnesty will have on struggling American workers.

Obviously, the fact that Obama's amnesty will screw American workers isn't something the establishment or their helpers want to discuss. So, the reader is urged to go to public appearances or even web chats involving politicians and reporters, and ask variants of the question below. See the Question Authority page for more information on the process, and see the recent posts on the DREAM Act page for more information on Obama's amnesty. Note that most of those harmed by Obama's amnesty will be Democrats.

A text version of the chat is below, together with screen grabs. "GFR" means Garance Franke Ruta. Also below are a few statements I made in response to statements she made, that she didn't post or respond to.

GFR: The DACA -- Deferred Action for Childhood Arrivals -- work provision makes it possible for undocumented young people brought to this country as children to apply for a two-year work permit. After that, they can apply to work legally anywhere they can get hired.

GFR: The whole point of the law is to make it possible for undocumented young people to be able to work or study without fear of deportation for at least two years. Most undocumented people are already working or going to school -- one major reason people come to the U.S. illegally is because they DO find themselves able to work here and to make more money than they can at home. Or at least that was the case before the downturn.

GFR: Migration has slowed markedly in recent years and fewer Mexicans are entering the U.S. now.

Jesse B.: (Just to add to your point Garance: the kids affected by DACA are essentially Americans in every way but the law. This is the country they grew up in; this is the place they call home.)

GFR: The theory behind the measure is that DACA-covered kids are in a uniquely awkward cultural position and it seems cruel to send someone to a country they've never lived in and where they may not even speak the language based entirely on their parent's actions.

GFR: There's also the startling phenomenon of unaccompanied minors crossing into the United States on their own, and how to handle their cases. Julia Preston had a great NYT piece on this last month: http://www.nytimes.com/2012/08/26/us/more-young-illegal-immigrants-face-deportation.html?pagewanted=all

GFR: I appreciate you have strong views on this topic. I am wondering if anyone else has any questions?

Now, here are two statements I made in response to her statements; she didn't post or address either of these:

You're still evading the point. Almost 3 months ago, I pointed out that it doesn't matter that those who'd be covered by DACA are already working: https://24ahead.com/n/11019 Because of DACA, those who were here illegally can compete in job types they couldn't before: fed. construction, office jobs, bank jobs, etc. Will you finally admit that's the case? Will you finally admit that that DACA provides competition for struggling Americans that didn't exist before?

Your "theory" is just self-serving blather that those who want to profit from the DACA eligible use. DACA will harm not just struggling U.S. workers and college students, it will harm struggling Third World countries that need all the smart people they can hold on to.

Once again: please get out there and challenge the elites, whether in web chats, on Twitter, or in person. Make them discuss the things they obviously do not want to discuss. 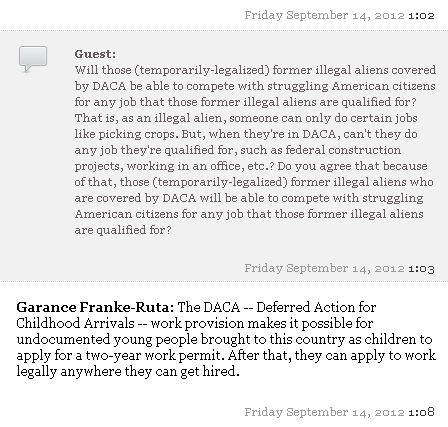 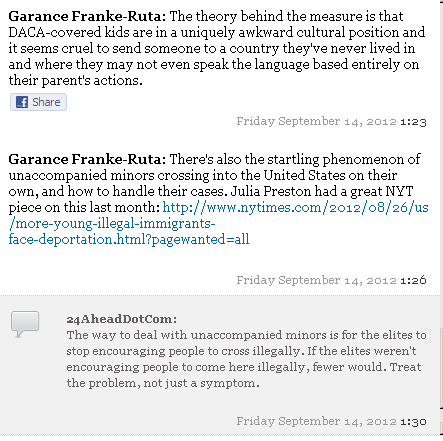 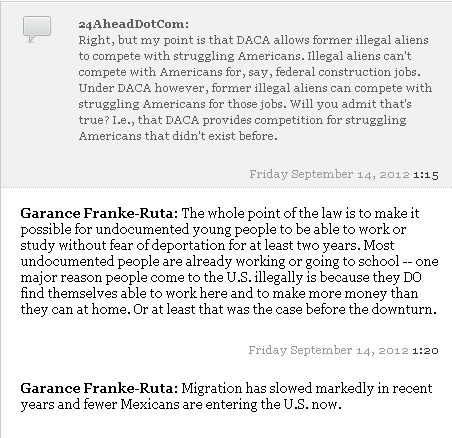