Per Andrea Nill of ThinkProgress (thinkprogress.org/2009/12/15/census-latinos-boycott):

In response [to a protest discouraging participation in the Census], the National Association of Latino Elected Officials (NALEO) has started using the Bible to target religious Latinos with a different message: What would Jesus do?

NALEO is handing out posters that illustrate the arrival of Mary and Joseph in Bethlehem. NALEO explains that the Gospel of Luke indicates that the reason Jesus was born in Bethlehem is because Joseph and Mary were fulfilling their civic duty by returning to the town to be counted by the Roman census. A poster printed by NALEO reads: “This is how Jesus was born, Joseph and Mary participated in the Census.” Nick Kimball, spokesman at the Commerce Department (which oversees the Census Bureau), said that the government played no role in creating the posters.

NALEO has at least one, albeit minor link to the Mexican government, and the reason they want as many Latinos to participate in the Census is obvious: they want to obtain even more race-based political power. And, they're twisting religion to their corrupt ends. 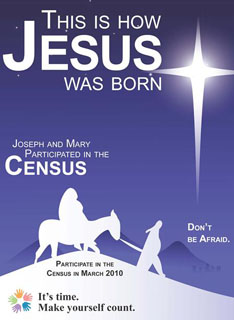 the mexican government of drug dealers and mass murder monkeys has been using race hate monkey religious BS For 70 years against the freedom loving people so what new? the reason why the drug dealers ( read white people using monkeys against white people ) of mexican use mary and joseph ( read mary a god if the idian people ) its away to keep the monkey idians in line so the idians can be used to infest and to raid and to occupy and invade other homelands that out not of that nation of hispanics