I'm sorry, I choked up a bit there. But, I will persevere. Ladies and Gentlemen, I have shocking news for you.

Many of the top "conservative" bloggers - the ones you rely on for information about the travesties of the Obama administration - are in fact Communist agents who are fully paid by George Soros and whose ultimate goal is the destruction of the United States and all she stands for. Not only are those bloggers Communists, Socialists, Marxists, Leninists, Stalinists, and Trotskyites, but they also intend the personal destruction of me.

And, I have in my hands a list of the names of these Communist Soros agents.

Please refer to the chart below showing their devious plan. And, I will now reveal the list of those Communist Soros agents, which I have taken from this attack on me.

Ladies and Gentlemen, the following persons are Communists who are in the direct pay of George Soros and the Soviet Union:

The people listed above are, quite simply, dedicated to the destruction of the United States. The only thing standing in their way are the valiant members of the tea parties, America's only true patriots. Thankfully, there are many of us, hundreds of thousands at least. 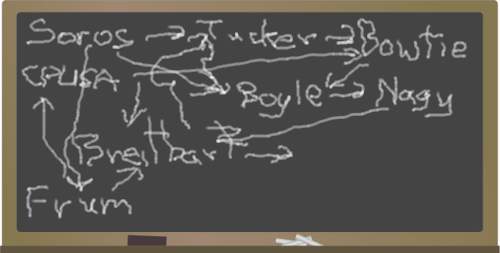