Juliana Barbassa of the Associated Press offers "Immigrant farm workers' challenge: Take our jobs" (link) about a new satirical campaign from the United Farmworkers of America. The UFW's campaign is anti-American; if you aren't familiar with this story see the last link. This post only deals with Barbassa's treatment.

According to the Labor Department, three out of four farm workers were born abroad, and more than half are illegal immigrants.

Apparently Jullianna Barbassa can't do math: that means that one out of four farm workers were born in the U.S., and somewhere between one quarter and one half of them are citizens or legal workers. So, plenty of Americans do in fact do farm work despite the fact that the UFW - and their promoters like Barbassa - would have you think otherwise. Why didn't she point out to them how the very statistics they provide undercut their already-weak argument?

Then, she gets cute:

During summer, when the harvest of fruits and vegetables is in full swing in California's Central Valley, temperatures hover in the triple digits. Heat exhaustion is one of the reasons farm labor consistently makes the Bureau of Labor Statistics' top ten list of the nation's most dangerous jobs.

Second, expect long days. Growers have a small window to pick fruit before it is overripe.

And don't count on a big paycheck. Farm workers are excluded from federal overtime provisions, and small farms don't even have to pay the minimum wage. Fifteen states don't require farm labor to be covered by workers compensation laws.

"The reality is farmworkers who are here today aren't taking any American jobs away. They work in often unbearable situations," (UFW president Arturo Rodriguez) said. "I don't think there will be many takers, but the offer is being made. Let's see what happens."

1. Apparently Barbassa forgot all about minor things like winning World War II, sending a man to the moon, and all the other things Americans have done. If we can do that, we can certainly do farm work. And, in fact, we do: see the too-complex-for-Julianna-Barbassa math above.

2. One wonders why Julianna Barbassa is supporting anyone in the U.S. working in "unbearable situations"? Why didn't she ask Rodriguez why we should support such work, especially under such conditions? Would Julianna Barbassa support child labor, or Chinese prison labor, or slave labor? Would she highlight how hard child laborers in offshore sweatshops work, encouraging those who complain to work under the same conditions? Is Julianna Barbassa completely unable of figuring out what she's supporting? Is she too biased to care? Does she know all this, but thinks she can fool enough of her readers?

3. Why didn't Julianna Barbassa ask any of these people what would happen if they couldn't employ illegal labor? Wouldn't farm employers need to clean up their act and offer good wages under safe conditions? Why is Julianna Barbassa supporting the opposite?

4. The idea of some sort of race-based monopoly on heavy work isn't just ahistoric and anti-American. It's also, well, a bit racist. See, for instance, the letter here which contained this: "...few young Americans want to do hard physical labor, particularly in our climate. And in the less-skilled construction trades – masonry, concrete, drywall, tile – more than 80 percent of Texas' workforce is Latino." 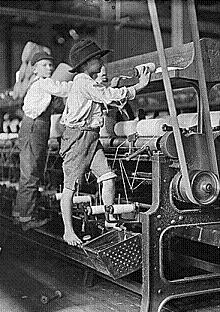