In the "Knockout Game", a victim is knocked unconscious in a surprise attack. Most or all of the perpetrators are blacks and usually working in a group; most or all of the victims have been non-blacks. Victims have included the political class such as Matt Yglesias and Rep Grace Meng. All these assaults are "hate crimes" and instances of racial intimidation and even if small in number they represent a major cultural problem.

Whining about the assaults is all the rage in conservative circles (screenshot from today's Drudge Report below), but, as usual, conservative leaders lack the competence to do anything about it.

Due to political correctness and their own failings, the liberal elites aren't about to mount an effective campaign against the assaults.

Conservatives have various severe failings that prevent them from doing any of those. As in other cases, that leaves most Americans stuck between two pathological groups.

A case in point is "Girl who got punched in head gives lame liberal speech humanizing her attackers" [1] by Patrick Howley of the Daily Caller:

And yet [the victim of one assault] still holds the kind of liberal guilt that convinces her, against all evidence to the contrary, that she is infinitely more privileged than the vicious teenagers who inexplicably assaulted her in an act of pure evil. She still cannot say something along the lines of, "Put these kids in jail and throw away the key." ...No. Of course not. She has to talk about youth programs, because games of pickup four-square moderated by college resume-padding suburbanites are, like, transformational and will totally prevent kids from engaging in the kinds of random brutality that is tearing apart our inner cities every day in a crisis of unprecedented proportions.

The food-throwing "conservatives good, libruls bad" isn't helpful towards solving this problem since there aren't too many liberals who'd actually support the assaults. There are some liberal leaders who'd attempt to downplay the assaults; that's where Howley should be focused but instead he lacks the competence to do it. While sending some juveniles to adult prison for long periods might have some sort of deterrent effect, there might also be a use for effective programs designed to prevent attacks in the first place.

That's where another conservative issue comes into play: their opposition to big government tends to cause them to oppose government programs, even those that might have a favorable cost-benefit ratio. Conservative leaders have little trouble riling up the base over programs that sound funny, even if they might be helpful overall.

Another issue is that the main goal of today's conservative movement (broadly defined) is to help the wealthy make more money. It's hard to imagine Rand Paul presenting lowering the yacht tax as a solution to the assaults, but it's not at all hard to imagine lighter versions of that such as an attempt to tie the assaults to Obamacare. Today's GOP and the Tea Parties are concerned almost exclusively with money and not with cultural issues.

Another problem with conservative leaders was discussed here in October 2008 (item #2). Fox News hosts and others have a long habit of whining about an issue and asking "why won't the MSM cover this?" but aren't competent enough to make the establishment media cover an issue.

A problem with the conservative base is their general withdrawal reflex: many want to go Galt or at least move to Idaho rather than engaging in society. The reflex of many conservatives is to turn their backs on their fellow citizens rather than trying to solve cultural problems.

Finally (just in this limited list) are the habits of most conservatives to fall for charlatans and charlatanry and to dismiss criticism that would help them. They'd rather stick with the incompetent who tell them what they want to hear, rather than helping those like me who could come up with an effective plan to address the assaults. I could come up with a campaign that would be at least somewhat effective, but the incompetence of conservative leaders would cause them to reject it and the conservative base lacks the ability to take up the slack.

The Obama administration filed a federal hate-crimes charge Thursday against a man whom authorities accused of using the “knockout game” to target a black man, videotaping it, and then bragging about the assault to strangers.

The charge marks the first time the administration has taken action on a “knockout” case after the game became an Internet and media phenomenon. It chose a case in which the person accused is white, even though most other cases reported in the news have involved black assailants. 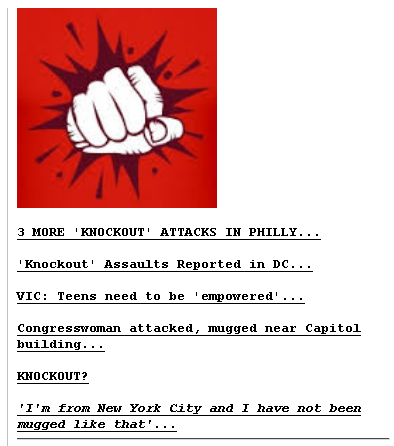