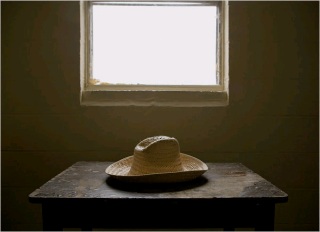 Getting to the story a bit late, on the second of this month Paul Vitello of the New York Times offered "Immigration Issues End a Pennsylvania Grower's Season" (link). For the backstory, see the post about Keith Eckel, the Pennsylvania grower who's switched from planting tomatoes on part of his property to planting corn and similar less labor-intensive crops. The bottom line: the article is pro-grower propaganda laced with purple prose designed to push for "comprehensive immigration reform" and/or a massive "guest" worker program.

1. Vitello states "This year, however, the new politics of immigration... has put him out of business." I'm not going to call that a flat-out lie, even though I strongly suspect that it is. As earlier reports indicated, Eckel simply decided to plant other crops.

2. The photo on the article shows Keith Eckel's back, walking away from the camera. Presumably he's crying or something. Not only that, but eleven other photos are associated with the article, including the one to the right from Chris Ramirez. Just as the Soviet Union had Socialist Realism, the NYT has Propaganda Surrealism.

3. Vitello states "A temporary federal guest worker program, which briefly made hiring migrant farm workers easier, was not renewed by Congress last year in the rancorous debate over border security." Presumably that's a reference to what was actually simply an extension providing additional visas for an existing guest worker program (H-2B), as described here: savesmallbusiness.org. We have at least two current small guest worker programs, and both are still available.

4. Vitello states "In the 10th Congressional District, where Mr. Eckel’s 700-acre farm is located, the incumbent Democrat, Representative Christopher Carney, has made the enforcement of strong penalties for illegal immigrants and their employers a signature issue in a tough re-election campaign; Mr. Carney is one of two dozen incumbent Democrats singled out for defeat by the Republican Congressional Campaign Committee." However, he fails to note that George Bush recently nominated Eckel to the U.S. Agency for International Development's Board for International Food and Agricultural Development.