Tech President/10 Questions: is it meant to work in the first place?

This site "techPresident" (techpresident.com) has launched a new feature called "10 Questions" that's highly similar to the existing site Community Counts (one of those behind CC is involved in 10Q). Basically, people will upload video questions for the candidates, others will vote on the top questions, the top ten questions for each candidate will be selected, and then the candidates will be asked to answer the questions.

Sounds great, except it won't work as it appears to be intended. By allowing a simple vote, the worst questions will be selected: Obama Girls, snowmen, puffballs, scandal questions, the whole lot.

In fact, I earlier sent techPresident a link to my much better suggestion. They ignored the first couple emails, but on the third the guy who runs it made a cryptic reference to other formats coming down the pike. I guess we know what one of those other formats is. Unfortunately, it's an inferior format, and it will simply lead to more of the same.

Which shouldn't be surprising considering those who are sponsoring it, which includes the New York Times, MSNBC, and a series Democratic/Republican partisan blogs. Almost zero of those sources would be able to recognize a tough question for a candidate if it fell on their head, and almost zero of those sources have any interest in any of the candidates being embarrassed by being asked a tough question.

UPDATE: Here's a tangible example. If these videos were entered into the contest, which do you think stands a better chance of being voted into the Top 10? 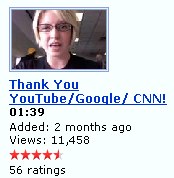 I'm going to hazard a guess that the one featuring Melissa Jenna would get more votes. Unfortunately, attractive as she is, none of her questions quite pack the punch that mine (such as the one on the left) do. With my proposal, anyone who voted up her videos and voted mine down would run the risk of reducing their own credibility.

With voting open to everyone, someone like "Captain Ed" or Instapundit could encourage their visitors to vote up select videos. Would either of those select videos that, say, took Mike Huckabee or John McCain to task for their support for illegal immigration? I would be extremely doubtful, since the "Captain" did an interview with Huckabee without quizzing him on his immigration stance, the area where he's weakest and where it would be easiest to completely discredit him. And, Instapundit did an 18 minute or so interview with Huck that didn't feature immigration at all, in addition to letting two John McCain lies about immigration fly right past him.

No one should trust either of those two to ask Huckabee, McCain, or the others tough questions about immigration, yet they could drive traffic to the contest and cause videos to be put into the Top 10.

The deck is obviously stacked against us in the asking questions dept. Its playing their game, their way. Just keep putting the lie to their disinformation, pointing out the invasion and its many ill consequences, especially where the media itself will not.