Was the "Moran" guy a prank? 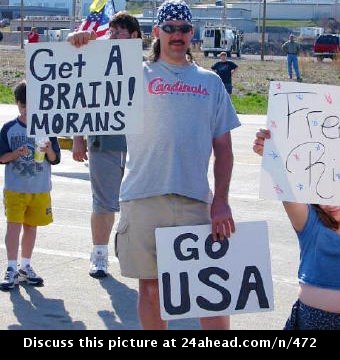 Got this by e-mail... no source, can't find it on google. Don't know if it's been posted here before, but I remember the many DU threads on the "Morans" rally in Milwaukee. But the piece is quite convincing. Apparently this pro-war rally was a fake!

With the anti-war movement in Milwaukee lacking a significant and consistent showing, when the Milwaukee police department tickets motorists who drive by anti-war rally's and honk in support of the protesters, in a time when the war is televised like a sporting event, a small group of Milwaukee artists, musicians, and outcasts decided to stage a mock pro-war rally to subvert the right!

The street theater action was committed on April 4th in near blizzard
conditions when 20 "fanatical pro-war" supporters occupied the opposite side of the downtown street to rally in support of the war and oppose of the peace activists who gather every Friday for the weekly peace vigils.

The 20 "pro-war" supporters dressed in suits, waved American Flags, chanted slogans in fierce support of war, death, and killing. Rush hour traffic drove by and honked in approval to the flags and signs that read: "Freedom Is The Enemy", "Get A Brain Morans", "Iraq Out Of Iraq", "Draft My Child", "Send Our Infants", "Soccer Moms For Blood", "War Is Peace", "I'm Pro Life And Pro Death", "Stop Reporting The Facts", "Peace Is For Pussies", "Bush Is The Savior", "This Is No Time For Thinking", "Pro Bush Lesbian", and "Ask Me About My Baby Killing Honor Student" among other slogans.

Before the event the local media were called and told about the "Clear Channel" sponsored pro-war rally. The reporters failed to get an interview from the pro-war fanatics because every time they approached the demonstrators they chanted "Boycott The Liberal Media!". The riot cops were very confused by the heartfelt chants of "We Love The Police State!". And the anti-war protesters were perplexed by the "All We Are Saying Is Give Death A Chance" chorus.

A few on-lookers with their jaws dropped may indeed never visit Milwaukee
again, but all told the "Pro-War" reaction was a smashing success that demonstrates the kind of gung-ho patriotism that would make George W. proud.

UPDATE: As indicated in the first comment, this picture wasn't taken in a blizzard, even if his sign matches one of the ones described above. I also can't find mention of an April 4 peace protest here. The dates are also wrong; the Moran picture is from sometime before March 26. Of the two Moran signs, we know that one was fake, and I'd bet that the other one is as well. If it helps any, I think the "We support our troops when they shoot their officers" sign might have been a fake as well.

UPDATE 2: A reliable source informs me that a) there was no blizzard anywhere near April 4th, and b) that if something like this fake protest had happened, he would have known about it.

this is not from milwaukee its from a boeing rally in Saint Louis, its a pro war rally outside boeing. The original picture was on www,stimc.org.

I work with the guy in this photo and he doesn't even have a computer.I seen this photo and posted it on the wall and he got pissed.I thought about posting his name but I better not.

All I get is the lies that Jim Moran is an anti-semite when I try that search. I wonder if Raindog isn't a liar, since his website link is bogus.

How old is the pic?

a different raindog (not verified)

Hey there, raindog! I was just looking for that picture, and here I am reading a post by someone with the same nick. Gotta love the waits.

oops...remove the first one plz. and this too if ya don't mind :)

if you search "pro war moran", you'll eventually come across the first web showing of the pic...on the st. louis imc site. not only is the "get a brain morans" guy the real deal, but there's other evidence of knuckle-dragging amongst the pro-war creeps. "missles" is from another sign flown at the same st. louis pro-war demo. i have no doubt that street theatre fake pro-war supporters would make use of the new word, "moran" in their signage. it HAS come to stand for the pro-war mentality.

if you search "pro war moran", you'll eventually come across the first web showing of the pic...on the st. louis imc site. not only is the "get a brain morans" guy the real deal, but there's other evidence of knuckle-dragging amongst the pro-war creeps. "missles" is from another sign flown at the same st. louis pro-war demo. i have no doubt that street theatre pro-war supporters would make use of the new word, "moran" in their signage. it HAS come to stand for the pro-war mentality.

well, that is a completely different scene than the one in the photo, which is FAR from "near blizzard" conditions. Everyone is wearing shorts and t-shirts, not the suits described in the fiction above.

Go to Google. Search "Alignment Specialist, St. Charles, MO". Go to Street View. That business in the background is immediately visible to the right. The shot is taken from a parking lot nearby. As stated earlier, this is a protest near Boeing in St. Charles, MO.