If I had hammer and sickle and dollar for every note that Pete Seeger sung at today's inaugural celebration in honor of Barack Obama, I would have to give most of it back to state!

Apologists note: The One, The Only Barack Obama attended the event, and in 2005 Seeger said "I still call myself a communist"; he'd said similar things in 2000 and 2004 (link).

Not that there's anything wrong with that or anything, but I am sure reactionary bourgeois pig folk singers are waiting their invites.. on the way to Sibir!

UPDATE: For the people's entertainment and educational purposes, I have included a video of Pete and Bruce Springsteen singing "This Land is Your Land". Our comrades on the inside who pretend to be capitalist pigs but who are actually on our side make issue over verses which are sometimes omitted (reason.com/blog/show/131127.html) and say this was a Marxist protest song originally written as an answer to "God Bless America." Da, and so? Our new president probably enjoyed singing along to this verse:

12/27/11 UPDATE: The original video (Youtube ID Xg0wiOHc9tI) was deleted so I replaced it with another copy.
Tags:
obama supporters
funny video
pete seeger 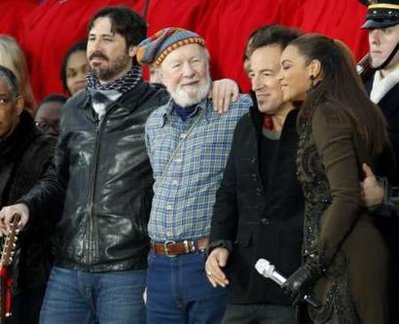 Obama the new Hitler many of us will become the new jew?

As I was walkin' - I saw a sign there And that sign said - no tress passin' But on the other side .... it didn't say nothin! Now that side was made for you and me! http://www.arlo.net/resources/lyrics/this-land.shtml Anyway, I came here to see if you were all over the border agent who shot a fleeing suspect in the back, picked up his spent casings and then didn't report it. You're slipping, lonewacko...

Obama is just the new face of Fascism. It's "Business as Usual" for our corporate masters and their plan for World Government. Quantanimo Bay is closing. Big Deal! What about the hundreds of domestic concentration camps that have been built?