The pandering by the Meg Whitman campaign has reached a new low, although I fully expect her to get even worse. The latest low is a billboard in Spanish (pictured right or below) which highlights her opposition to both the new Arizona immigration law and to Proposition 187.

The story about this (link) says that's a Whitman billboard and the picture is a screengrab of a video, so I'm assuming that it's been verified as coming from the campaign. And, it matches what she's said in previous pandering attempts, but somehow as a billboard it seems more in-your-face to the millions of Californians who support Arizona's law.

Your job: make sure as many Californians as possible know where Whitman stands.

The Meg Whitman for Governor Campaign has launched a Spanish-language outdoor advertising campaign as part of a comprehensive outreach effort to California's Latino voters.

One ad reads, "MÁS TRABAJOS," or "MORE JOBS." A second ad features a quote from Meg Whitman, "NO a la Proposición 187 y NO a la Ley de Arizona," or "NO on Proposition 187 and NO on the Arizona Law."

"This represents the next step in our continued effort to communicate with Latino voters," campaign spokesman Hector Barajas said. "While these ads help clear up some misconceptions, Meg Whitman understands the importance of our Latino community and the need to get all Californians working again."

Your job is to communicate with Americans - whatever their race or ethnicity - who support the Arizona law and let them know where Whitman stands.

UPDATE 2: Here's a clearer picture, from this: 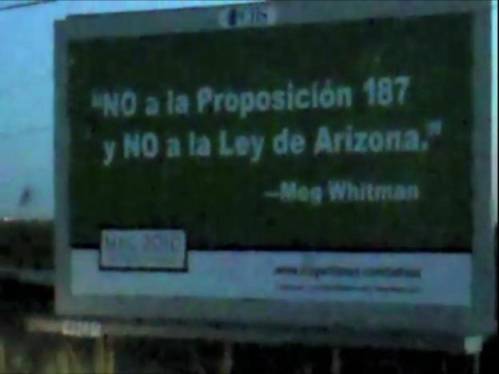