...while the case for high-skilled immigrants is strong, and the desire to take the focus off the culturally freighted topic of migration from Latin America politically understandable, an excessive focus on the idea of importing supergeniuses and talented engineers tends to obscure the fact that essentially any able-bodied, hard-working migrant is good for the American economy... ...different "factors of production" - including unskilled labor - are largely complementary. This can be most clearly seen in agriculture. Some land in America is farmed, most is not. Much of the land is only profitable to cultivate at a wage level that few American workers find appealing. When we cut off the flow of migrant farm workers, that doesn't magically create high-paying jobs for Americans; it leads in the short term to crops rotting in the fields and in the long term to less land being cultivated.

2. There are millions of "able-bodied, hard-working" Americans who are unemployed, and Yglesias would like to import foreign citizens to compete against them for scarce jobs? People coming here tends to increase consumer spending, but at what cost? It also raises social spending and creates competition for jobs that Americans could be doing. Yglesias later says the idea that there's a fixed pool of jobs is wrong, but at any point in time there is indeed a fixed pool of jobs. And, currently there are many more applicants than jobs available. Having millions of Americans out of work isn't just a direct fiscal issue: it has long-term impacts on society.

3. Another aspect of how Yglesias is wrong about that is discussed on the people vs workers page: people aren't refrigerators and they do things besides just working. Good luck getting Yglesias to factor that into his analysis.

4. Labor costs are not a large part of the cost of production for most crops. Even the USDA admitted that millions of illegal aliens leaving the U.S. would not devastate agriculture. The crops rotting in the fields is largely just grower propaganda; instead of busting their propaganda effort, Yglesias furthers it. See those two links, immigration agriculture, Tom Vilsack, Western Growers, and related pages for much more on this aspect. Instead of opposing corrupt growers - forcing them to modernize and use legal labor working for good wages under safe conditions - Yglesias would give them even more of the cheap, exploitable foreign serf labor they crave.

5. Over three years ago, I sent an open letter to the Center for American Progress (Yglesias' previous employer) describing how they could help get unemployed, homeless Americans working again. That was based on a post by Yglesias, and it describes a non-"magical" way that Yglesias and CAP could have helped their struggling fellow citizens. Needless to say, Yglesias and CAP never replied, and that's because they don't really care.

The image below is from the article. I don't know if that's Yglesias in the foreground, but it definitely is what Yglesias thinks of his struggling fellow citizens. 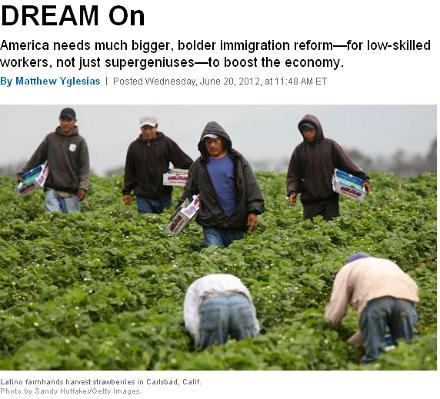