Kyle de Beausset is a Harvard University student and occasional quote source in support of the anti-American DREAM Act. Recent comments from him show that his anti-Americanism doesn't just include letting illegal aliens take college educations from Americans, but is much more generalized. By itself, this means little since he isn't that well-known. However, it might be interesting to speculate about which more well-known people hold similar views, even if they know enough not to openly state them.

On Twitter (full exchange in the attached graphic), he posted these two tweets:

#dreamact youth are more American than you or I will ever be @24AheadDotCom_ . Deal with it #Arizona #immigration #ri4a #dwn
(source: twitter dot com/kyledeb/statuses/17924363764)

@24AheadDotCom_ immigrants choose and fight to be American. All you did was be born. #immigration #teaparty #tcot #p2
(source: twitter dot com/kyledeb/statuses/17926925913)

In other words, he thinks illegal aliens are more American than Americans and he thinks that native-born citizens are second-class compared to immigrants. Would that more high profile people were so honest! Just to pick two names out of a hat, I doubt whether Andrew Rosenthal or Joe Klein would disagree with DeBeausset all that much. On the other hand, I think even Barack Obama wouldn't go quite that far.

I'm not even going to try to refute de Beausset's comments. De Beausset is entitled to his opinion, and if you're a citizen - especially a native-born citizen - you're entitled to your opinion of him based on the fact that he thinks you're second class compared to naturalized citizens and even illegal aliens.

Note also that, as shown in the attached picture, I corrected him on disinformation he was spreading about the new Arizona immigration law. 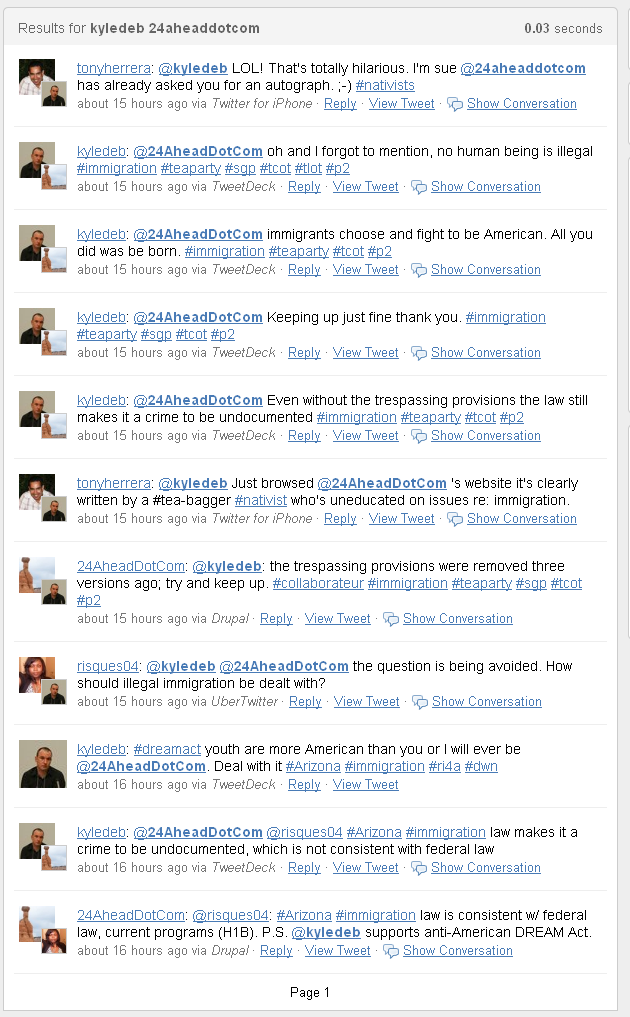