The GOP has a new web application called the "Obama Card" at gop.com/obamacard. You search for terms and it shows you how much they'll cost you on your "Card". It didn't work for me the two times I tried it, but it appears to be yet another cheap stunt from the GOP; their time would be better spent on, for instance, showing how their opponents are wrong.

Speaking of that, John Aravosis of AmericaBlog offers "RNC Web site promoting anti-Semitic, anti-Latino, and pornographic literature" (link) in which he details several searches he did for items at their "store", some of which brought up salacious or troubling material. What he fails to note is that they're apparently simply bringing in results from Amazon.com, and the images and books shown are from Amazon.com. Instead of being able to understand that, he's trying to blame the results on the GOP.

For instance, he makes a big deal about a search for "jew" bringing up a book called "The Jews And Their Lies". What he didn't realize is that when you do a search for the same term at Amazon.com, that's the first result. Aravosis also didn't bother to do a basic search to see that the author of that book is someone a few people might have heard of, Martin Luther.

You can buy political books from a page on this site and you're encouraged to do so since a portion of the proceeds are used to keep this site on the air. Should I be responsible for what comes up in a search? Will anyone who runs a similar site that displays results from Amazon have to spend their days filtering out the tens of thousands of possibly offensive material?

UPDATE: Chris Frates of the Politico joins in the virtual book burning with "RNC pulls game selling offensive items" (politico.com/news/stories/0709/25069.html). While, unlike AmericaBlog, he points out that the books were coming from Amazon, he doesn't point out that the author of the book listed above was Martin Luther. Nor does he point out that a book called "The Latino Threat" is the second search result for "latino" in Amazon books and is actually a pro-massive immigration tome. He simply ripped and read from AmericaBlog and cleaned it up a bit.

UPDATE 2: The following comment at "The Political Carniva" was deleted (thepoliticalcarnival.blogspot.com/2009/07/family-values-rnc-web-site-promoting.html):

Can you trust the "Political Carnival"? Click here and find out. 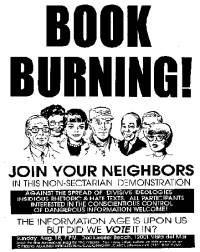