Mitt Romney economic advisor Greg Mankiw posted a dumb joke about deporting seniors to his personal blog; see the clipping he posted below.

Of this, Glenn Thrush of the Politico says the following (link), thus ushering in the first part of what might be a long series of posts showing how much of a hack Thrush is:

Greg Mankiw, the Harvard professor who serves as one of Mitt Romney’s top economic advisers, has managed to take a shot at two key constituencies – Hispanics and seniors – in a single linked post on his popular economics blog.

...If Mankiw was just a Harvard professor, the joke wouldn’t likely resonate. But he posted it on Tuesday – the day when Paul Ryan released a budget Democrats instantly decried as a Medicare killer and two days after Romney scored a big win in Puerto Rico’s primary – which counter the flurry of criticism he’s drawn from Hispanic groups for his embrace of the controversial “self-deportation” immigration strategy.

A Romney spokesperson referred calls to Mankiw. He later responded to an email query with this statement: "Obviously, it is not serious. A joke."

1. It's just a dumb joke, although it has a kernel of truth about health costs. Mankiw would be better served by discussing that in non-joke terms.

2. Glenn Thrush is assuming that illegal aliens and Hispanics are the same thing, when they aren't: some or many Hispanics oppose illegal immigration.

3. Glenn Thrush is assuming that all Hispanics are the same in another way: that they're all personally invested in immigration. Puerto Ricans are citizens and thus don't share the same concerns with immigration that some Mexican-Americans do.

4. Glenn Thrush is acting like a Media Matters for America intern and looking for gotcha rather than acting like a real journalist and delving into Romney's policies or into the obvious motivations of those "Hispanic groups".

5. Self deportation - aka attrition - isn't that controversial: it's the official position of states like Arizona via their immigration law, one most Arizonans support. The main place where it is controversial is among the elites and others who seek to profit from illegal activity in one way or another.

Stay tuned for what will probably be a long series showing how Glenn Thrush is wrong. See that link for a few previous examples. 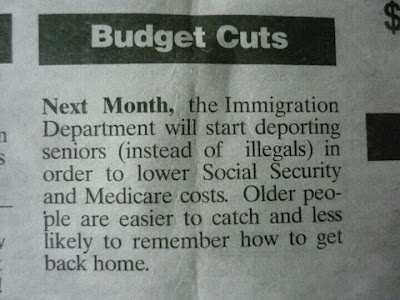