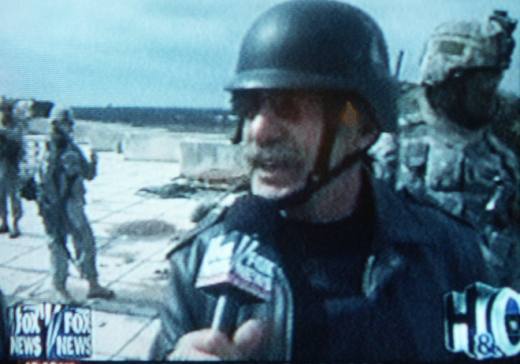 Geraldo Rivera is half Jewish, half Puerto Rican (Spanish). He hasn't let that stand in his way of standing in solidarity with the indigenous people to whom he has no bond otherwise, such as by supporting illegal immigration and penning a new screed at his site [1].

Discussing it in depth would be worth even less than Geraldo himself, but let's look at this:

All most of the undocumented want is a fair shake and a chance to work hard and realize what we proudly call the 'American Dream'. Give them the chance to regularize and legitimatize their status and watch, as they become another beautiful component of the national mosaic. Maybe even Republicans.

A few paragraphs before that, he said this:

Isn't it reasonable to think that residents of Mexico might hold some affection and nostalgia for their lost North America Empire...? ...Where are the casinos and oil leases for the Mexicans forcibly excluded from their historic lands along with the Apache, Navajo, Sioux and Seminole? ...all agree that modern boundaries are now firmly and forever established. Every reasonable commentator understands that.

Obviously, the thoughts of a few "reasonable commentators" mean nothing when dealing with millions of people who hold "affection" for their "lost North America Empire". Geraldo thinks that we should allow Mexicans to resettle their lands, and somehow by doing that they'll automatically be converted into Americans. History - and everything he says - shows that Geraldo is a fool.

On a related note, his production company (Maravilla Productions) is one of the top lifetime contributors to... the Reverend Al Sharpton, turning over $10,000 to the clergyman. [2]

I've noticed his allegiance to lawbreakers for a longtime..and what is it about all these hispanic media types -ALL for importing millions of their own...AS FAR AS I AM CONCERNED GERALDOS ARGUMENT HOLDS AS MUCH WEIGHT AS AL CAPONES VAULT!!

Many is right. but understand one fact with mass population being sent here by the drug dealers who run mexico city and the brown/yellow/black world, "he in the end game will be called a hero of his people", see people if you don't stand side by side and fight in the old way you can't win, Geraldo Rivera hate anyone who is not of his people! and supporting evil is his game. See it for what it is!

He's full of shit, mexicans have never settled any of the ceded territory like they do now.

Mel Gibson gets the better of an argument with a Latin American studies professor, and the students cheer him! http://www.dailynews.com/ci_5505359

Lost North American empire? What exactly is he talking about? The Aztecs? Here's where that empire was located. The Maya? Here's where they were. The Inca? They were here. There was never a "North American" empire. One of the reasons it was so easy for the Europeans to take over was that all of the different indian groups and tribes had their own interests in mind and weren't part of any cohesive alliance.