Earlier today, a gunman took hostages at the Discovery Channel building; the situation has been resolved. We discourage using the actions of someone who's most likely insane to score political points. Unfortunately, because parts of the gunman's screed relate to immigration, Andrea Nill of ThinkProgress didn't follow that advice and took advantage of this situation to push her support for massive immigration and to smear those she opposes.

Nill's post is "Purported Eco-Terrorist Angered Over ‘Immigration Pollution And Anchor Baby Filth'" (thinkprogress.org/2010/09/01/discovery-terrorist-immigration) and a screengrab is below in case ThinkProgress pulls it. The only way his screed bears a resemblance to the groups she lists (FAIR, Center for Immigration Studies, and others) is that they discuss the same general topics, and do so in English. Those groups do not, for instance, refer to babies as "filth", do not oppose all procreation, and don't even oppose immigration. There's nothing that they've written that would be in the alleged hostage-taker's lexicon, in fact he'd probably be opposed to them as much as he is the Discovery Channel. One might as well claim that what Andrea Nill writes bears a "troubling resemblance" to the Revolutionary Communist Party's take on immigration or compare the environmental coverage of ThinkProgress to Ted Kaczynski's screed. 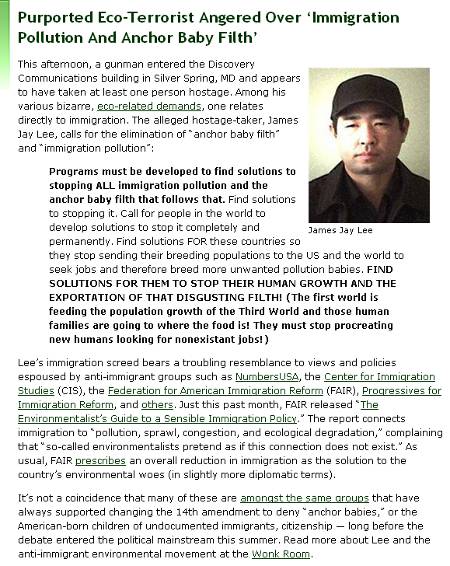