Remember the "USA Freedom Kids", the trio of little girls who gave a cute-but-creepy serenade to Donald Trump before one of his Florida rallies? In yet another example of just how incompetent Trump is in the political arena, they're now suing him [1]:

Jeff Popick, the group's manager and the father of one of the girls, told CNN the Trump campaign did not give him and the girls their due.

Popick claimed the Trump campaign failed to allow the group to set up a table to sell CDs at a rally and then, after making a trek from Florida to Des Moines, Iowa, canceled the Freedom Kids' scheduled performance. He said the Trump campaign never made the situation right and that it was worth legal action.

"This is the way they played us," he said. "They can only ignore us for so long."

This is apparently how the table came about [2]t:

After Mr. Trump announced his candidacy last summer, Mr. Popick contacted various members of the campaign staff. He said he asked for $2,500 for the Jan. 13 appearance in Pensacola, but a staff member instead offered a table to sell the group’s merchandise outside the event. But when they arrived, there was no table, Mr. Popick said, calling it a breach of contract.

Even so, the campaign asked the group to perform again, he said.

The way this started might have been unknown to Trump and just reflects on the incompetents he chose to run his campaign. However, by now Trump has probably heard about it (either that or he's unaware of things that could make him look bad). He could have easily just written them a check, as should have been done in the first place. Any competent campaign wouldn't have given their opponents an opportunity by having a performance that many consider to be a bit creepy. But, if they were going to have such a performance, any competent campaign would have paid them at the time or later just to make it go away. Since Trump obviously can't rise to that low level, how's he going to get all his other promises? 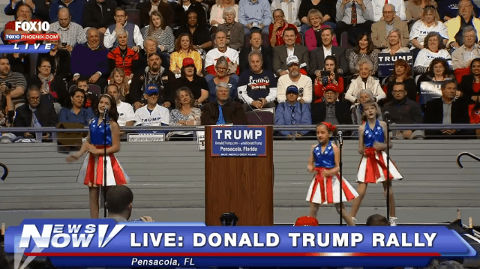