You might not expect the Daily Caller to delete a comment on a thread taking Popular Science to task for shutting off comments, yet that's exactly what they did [1].

On Sep. 25, Sean Medlock (the real name of "Jim Treacher") posted "Popular Science shuts off comments, so take your climate denial somewhere else" [2].

It includes such nuggets in support of open debate as "After all, what’s less scientific than debate?", "it’s their site and they can do whatever they want with it. And we can laugh at them for being huge crybabies", "Yeah, that’s what science is all about: Getting people to shut up and do as they’re told".

In the spirit of open debate, I posted the following comment in reply to someone else's comment that simply said, '"Because ... shut up," they explained. ':

Tell me about it!

Instapundit hid behind a fake name ("Hit & Run") to tell me to "STFU". Twice.

Several r/w and l/w bloggers and sites have deleted perfectly valid comments or banned me, just for disagreeing with them.

Likewise with this site. Back in 2011, Jeff Poor of Daily Caller banned me for leaving a comment that backed up his post (prior comments had been very critical of him). Not only that, but Jeff Poor was such a p**** that he blocked me on Twitter too.

Being strict authoritarians and being scared of others finding out how you're wrong affects all types of partisan hacks and hacks in general. They can't show how their opponents are wrong, so they lie, smear, and attempt to silence others.

P.S. I've since posted about Sean... er, I mean "Jim Treacher" and eventually I'll get around to posting about Jeff Poor.

To the Daily Caller, open debate only goes so far: my comment was subsequently deleted. You can see where it was in the image below; it's been replaced with the "This comment was deleted" notice.

Or, as Jim Treacher/Sean Medlock might point out, it's their site and they can do whatever they want with it. And we can laugh at them for being huge crybabies.

Scratch the last bit: I don't want to stoop to Medlock's level and laugh at people. Instead, raise the bar way above the level of the Daily Caller and point out just how intellectually weak they are and just how disinterested they are in open debate.

While there are much more important things you can do (see the Take Action sections above), if you have a second please look up those who talk with @JTlol and @jeff_poor and point out how weak Medlock and Poor are. Instead of laughing at them for being huge crybabies, point out just how little respect they have for open debate.

Note that this is hardly the Daily Caller's first brush with irony. And, for dozens of previous examples of those opposed to open debate, see deleted comments. 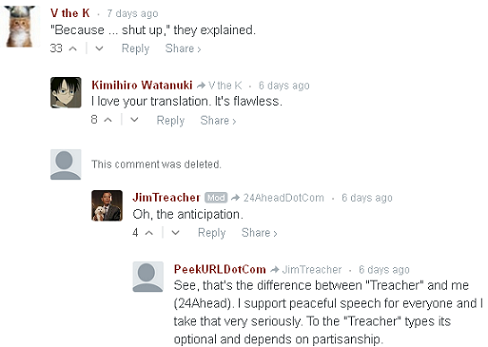