Those of us who don't read newspapers in their paper form are missing out on a real treat: the highly intelligent thoughts of our nation's finest editorial cartoonists.

Meanwhile, from the other end of the spectrum, attached are two cartoons from Steve Sack of the Minneapolis Star Tribune (top) and Matt Bors of United Features Syndicate. Both are incredibly dumb, but the offensiveness and stupidity of the second one pushes it over the top.

Both scrawlers are simply in effect tools of those who seek to profit in one way or another from illegal activity, offering over-the-top stereotypes of their opponents. And, Bors doesn't seem to understand that the "wingnuts" (presumably the tea parties) have mostly ignored immigration matters to a certain extent because their leaders are among those who want to profit from massive or illegal immigration. 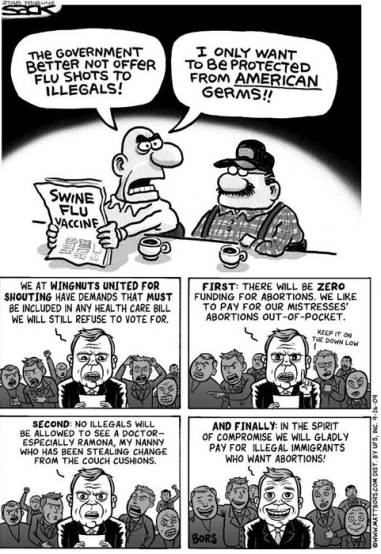 Hey does anyone know if that van that crashed through the border crossing was driven by Geraldo??

Sorry, the Mexican's aren't the Huns. Instead of going down the sad path of xenophobia, racism, and war, why not accept their existence and incorporate Mexico into the U.S. as 10+ new states, reversing the pattern as millions of Yankee gringos move south and set up whole new English-speaking cities, especially along the 5.8K-mi. coastline, raising the GDP? The only thing standing in the way is the corrupt Mexican federal govt., which the Mexican people will dissolve after the Congress official invites them to. Click the url to read about the nonpartisan Megamerge Dissolution Solution.

_Sorry, the Mexican's aren't the Huns. _ The analogy is not totally without merit. [1] _...why not accept their existence and incorporate Mexico into the U.S._ Because then America would not really be America, or all that American, anymore. And mountains of evidence indicates it would be a disaster. [2] You know better than anyone why you choose to ignore all of that -- e.g. that Hispanics are 4x as likely as Whites to be incarcerated, and significant academic underachievers. Meaning they largely form another underclass, which is a kind of social pathology. You know, it just could be that the reason Mexico is what it is -- a shithole country that its people flee in droves, even if that means entering another country illegally -- is because Mexico is full of Mexicans.

Hey Winslow GET LOST YOU MORON.

I concur. What makes us unique is that we are white and decent, and not mexicans born with social pathology. I'm proud to be an American xenophobe, or whatever racist tag you want to assign to me.

what Mary said! thank you eh and TL Winslow come back say more about mexico and the third world monkeys its fun to see really stupid people who hate freedom and never will get the point of freedom over total primeval BS. oh yes submit to your rulers in mexico city, maybe the rulers will toss you a little boy.

Obama and his evildoers cutting the border patrol.....must really like those drug cartels killing 17 people at a clip ( like at the drug rehab clinic).......Obama needs their profits for his next campaign

Mary is great. I don't think obama Will let us have a "next election", and if we do see a new election it will have only one person running "Obama our beloved leader".

What happened to the admin's big plan to stop all of the supposed American weapons going south? I guess it's enough that our economy is going south instead.

above you mean all the weapons coming from china to mexico?