Enablers of the tea parties have, of course, been completely intellectually dishonest when attempting to defend themselves against claims that Jared Loughner is linked to them in one way or another. One example is here, and today's example involves the New York Times piece "Looking Behind the Mug-Shot Grin" (link).

Based on the relevant portion of that article [1], Loughner sounds a bit like a libertarian or perhaps anarchist [2]. Instead of considering the whole of the relevant portion of the NYT article, Tea Party enablers stop at the part about not liking George W Bush, attempting to portray Loughner as a liberal. (Personally, I think he had no clear ideology but might have been motivated by Tea Party tactics.)

The NYT article gives the impression of someone who leans more to the libertarian side, and teaparty enablers are trying to transmogrify it into making him a liberal:

* Rich Lowry links to the NYT article and stops at the part about Bush:
nationalreview.com/corner/257277/dupniks-confession-rich-lowry
He's also still trying to blame Clarence Dupnik.

* Glenn Reynolds links to the Lowry post with "LOUGHNER: NOT EXACTLY A TEA PARTIER: “His anger would well up at the sight of President George W. Bush, or in discussing what he considered to be the nefarious designs of government.”" (pajamasmedia.com/instapundit/113333)

* Pat Dollard offered at post linking Loughner's school to George Soros and quoting the Bush part of the NYT piece (but not the rest). He also seems to have deleted the post which was at:
patdollard.com/2011/01/soros-educated-loughner-bush-hater and bit.ly/hHeNpf

* Andrew Breitbart tweeted a link to the Dollard post before it was apparently deleted:

* Dana Loesch tweeted a link to the NYT article:

* Matt Drudge at post time is linking to Page 3 of the NYT piece with the text "AZ SHOOTER: BUSH HATER..."

* Fox News offers the blog post "NYT: Arizona Shooter Was a Bush Hater" which stops at the Bush part of the relevant portion:
nation.foxnews.com/jared-loughner/2011/01/17/
nyt-arizona-shooter-was-bush-hater

UPDATE: Earlier I said Loesch linked to the Dollard post; she just linked to the NYT piece. I've updated this with their full tweets.

UPDATE 2: The Dollard blog post is back at:
patdollard.com/2011/01/soros-educated-loughner-bush-hater
It was unavailable while he "[e]xpanded the story." (twitter dot com/PatDollard/status/27125395375529984).
I've added an image he included with his post to show the types of people who enable the teaparties.

But Jared, a curious teenager who at times could be intellectually intimidating, stood out because of his passionate opinions about government — and his obsession with dreams.

He became intrigued by antigovernment conspiracy theories, including that the Sept. 11 attacks were perpetrated by the government and that the country’s central banking system was enslaving its citizens. His anger would well up at the sight of President George W. Bush, or in discussing what he considered to be the nefarious designs of government.

“I think he feels the people should be able to govern themselves,” said Ms. Figueroa, his former girlfriend. “We didn’t need a higher authority.”

Breanna Castle, 21, another friend from junior and senior high school, agreed. “He was all about less government and less America,” she said, adding, “He thought it was full of conspiracies and that the government censored the Internet and banned certain books from being read by us.”

Among the books that he would later cite as his favorites: “Animal Farm,” “Fahrenheit 451,” “Mein Kampf” and “The Communist Manifesto.” Also: “Peter Pan.”

[2] Many libertarians were opposed to George W Bush, and libertarians, the Teapartiers, and conservatives in general are "all about less government".

Finally, we know what drove Tucson shooter mad… GEORGE BUSH.
The Corner discovered this buried in a New York Times article, via Instapundit:
(This little nugget was hidden on page 3 of the online article.) 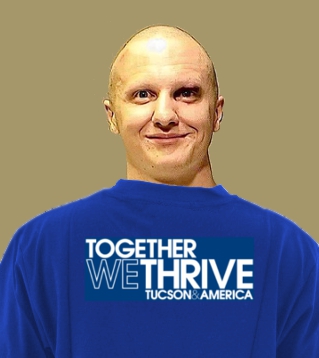