The Congressional Budget Office has released "A Description of the Immigrant Population" (PDF link, cached), showing, among many other things, that the percentage of foreign-born people living in the U.S. is now at its highest since 1920; see the chart attached below. Per the CBO, as of 2009 there were about 39 million foreign-born people living in the U.S.; of that number, 17 million were naturalized citizens and about 10.8 million were illegal aliens.

* In 2009, about 38 percent of foreign-born people in the United States were from Mexico or Central America; the next-largest group came from Asia and accounted for 27 percent of the total foreign-born population.

* In 2009, more than 1 in 4 people in California and more than 1 in 5 people in New York and New Jersey were born in another country. Conversely, in 31 states, fewer than 1 person in 20 was foreign born. The foreign-born share of the population increased in all but three states between 1999 and 2009.

* Marriage and fertility rates are generally higher among young foreign-born women than among their native-born counterparts.

From the report, note also these: 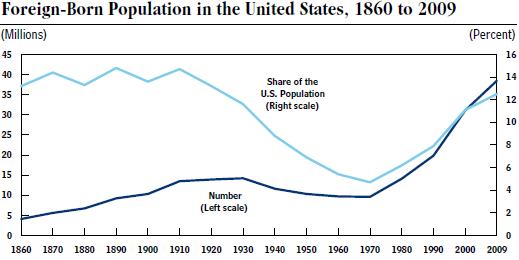