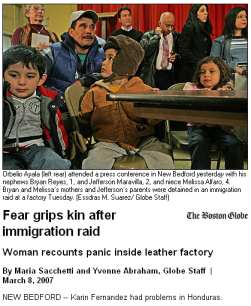 Maria Sacchetti and Yvonne Abraham of the Boston Globe offer a massive slab [1] of pro-illegal immigration propaganda in "Fear grips kin after immigration raid" about the Michael Bianco, Inc. raid. The article is designed to provoke an emotional response and encourage those who aren't familiar with this issue to support illegal aliens being allowed to continue working here rather than being deported. It glosses over illegal activity and the alleged Dickensian conditions at the plant.

It even features a highly saturated photo from a press conference with three children being used as a prop. At first glance I thought the photo was a painting, and I wonder whether it really came out of the camera looking like that or whether they've performed some color manipulations.

Karin Fernandez had problems in Honduras.

She was two months pregnant, and the baby's father was gone. She had only a ninth-grade education and no work.

But her aunt in New Bedford offered a solution: Come to Massachusetts. Have the baby here. Work in the leather goods factory where it's easy to find a job.

In late 2005 she paid a smuggler $4,500 to bring her over the border. She made it to New Bedford and to the factory where the managers were said not to care if their employees' documents were fake.

Their hugely sympathetic rendering has just glossed over people in foreign countries looking to the U.S. as an escape valve rather than trying to solve their problems in their home countries. There are hundreds of millions or billions of people in situations worse than Fernandez', and they can't all come here. And, that escape valve is something the leaders of countries like Honduras know about and encourage. Isn't it better for us and for them to encourage those countries to solve their own problems rather than using us as an escape valve?

They also gloss over what was most likely an explicit attempt to have an anchor baby, as well as the network effect involved in illegal immigration. And, needless to say, human smuggling is illegal, as is entering the U.S. without permission, as is hiring someone knowing that they're an illegal alien.

Maria Sacchetti and Yvonne Abraham (with contributions from Brian R. Ballou) want you to forget about those unnecessary complications. Just look at the waving baby, concentrate on the waving baby, you're getting sleepy, you're ready to support massive illegal activity and sweatshops...

Please write ombud *at* globe.com with your thoughts.

UPDATE: As Jeebie points out in comments, $4500 is a lot of money in Honduras. In fact, according to this, the Honduras Per Capita Gross National Income was $2710 USD. This page say the Gross National Income per capita was $2590 USD in 2003. This page has it even lower: "per capita gross national income in 2003 was approximately $970", and this page agrees. Let's be generous and say it's $3000. Meaning that she was able to come up with at least one and a half times the per capita gross national income of her country, and we're supposed to believe she "had problems"? For those who'd like to do more research, $4500 is equivalent to about 85,000 Honduran Lempiras.

She had at least $4500 available to pay a smuggler, and she was in a crisis? And then came here to work for $7 an hour?, in MA. no less? Wouldn't that make for a comfortable house and a middle class life in Honduras? The math seems fuzzy, unless anchor babies are extremely profitable. Last I read, you could only trade one for a used Dodge Intrepid. Now she will be out the 4500, possibly returned to Honduras, and then she will have a crisis. Sad, but no sympathy, here. The price of choosing to invest in crime is sometimes very high. She will have to live with the consequences of her criminal actions and her bad choices in life, preferably in her own country.

"She was two months pregnant, and the baby's father was gone. She had only a ninth-grade education and no work...she paid a smuggler $4,500 to bring her over the border." Where on earth did she get $4500??? _I_ can't even come up with that kind of money!!! Why don't these people just get themselves a tourist visa and a plane ticket...and then just never go home? It's much cheaper. Who's going to come after you? The stupidity of this culture never ceases to astonish.

_Why don't these people just get themselves a tourist visa and a plane ticket..._ An uneducated Latin American woman with no job is not going to get a tourist visa to enter the US -- this is why they pay to be smuggled in.

Not to ruin this little attempt at preaching to the choir, but let me just pick one quick hole in your little tirade regarding the numbers: The aunt in Mass. gave her $4.5K to come over. To the aunt this was likely expensive, but undoubtedly -not- impossible for her to round up, and is in keeping with the idea that her aunt invited her to the U.S. to help her out. Would you look at that? One ounce of critical reading, and I've somehow found an explanation for the $4.5 that doesn't automatically make her a liar. Amazing!