Barack Obama Mania visited near-South Los Angeles earlier today, as the presidential candidate delivered a stock speech before a few hundred supporters at the Rancho Cienega Sports Complex. The speech was held outside in the bleachers of a softball field, and that made it a bit difficult to get a good photo. 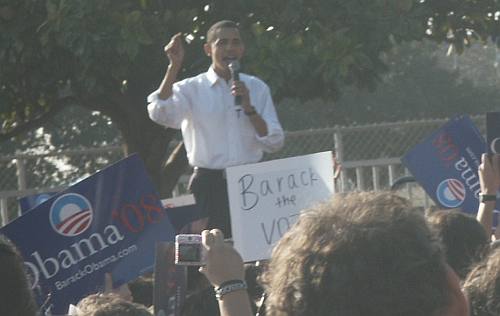 About the only Los Angeles-specific part of the speech involved him promoting finding jobs for some of the unemployed in the surrounding neighborhoods. Needless to say, he didn't explain how illegal immigration - something that he strongly supports - would make that more difficult than it would be otherwise.

Unfortunately, there was no Q&A session, so I wasn't able to ask him something that would take the wind out his sails a bit:

Senator Obama: You spoke at the May 1, 2006 illegal immigration march in Chicago. That march was organized with the assistance of representatives of Mexico's three major political parties. And, one of the other groups that's organized similar events is partially funded by the Irish government. And, two marches in Georgia were organized by a former Mexican Consul General. Were you aware of this? If you weren't, shouldn't you have been? If you were, I would like you to explain exactly why you find it acceptable for those linked to foreign governments to meddle in our internal politics.

I wasn't able to ask that question, but I strongly urge everyone to go to his future appearances and try to ask it or something similar.

After his brief stop in South L.A., he heads to the Westside (the Best Side) for a Hollywood fundraiser to be held at the Beverly (Hills) Hilton expected to net him over a million dollars.

"Needless to say, he didn't explain how illegal immigration - something that he strongly supports - would make that more difficult than it would be otherwise."

I watch Flip This House on A & E. In one episode, an African American broker tells his contractor to tell one of his subs, also black, that unless he came down in his bid considerably, he would go down to the corner and get some day laborers. Econ 101.