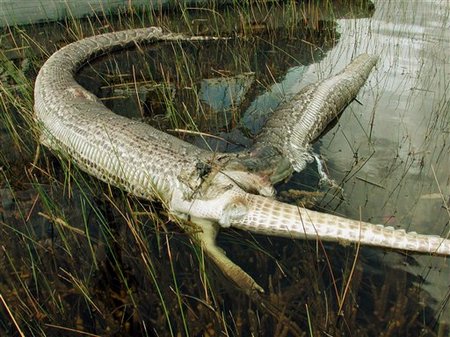 You may have seen the picture of a python that tried to eat an alligator and ended up split in half with a burst stomach. It's a real picture, as described snopes . com/photos/animals/snakegator.asp. The photo was taken 9/26/05 in Everglades National Park, and the American Alligator was 6', while the Burmese python was 13'.

Yes, there are indeed gigantic Burmese pythons in that U.S. National Park. It is Florida after all, and that's where all the strange things go to happen. For more, see "Huge, Freed Pet Pythons Invade Florida Everglades" (news . nationalgeographic . com/news/2004/06/0603_040603_invasivespecies.html) and this NPS report (nature . nps . gov/YearinReview/02_B.html). These pythons can reach 20 feet long. Want to go camping?

so retarded who cares

eww just a though how did the prople get there just in time 2 see that happen, its like predicted it 2 happen sounds a lil suspicious 2 me but it is still kinda weird

Time to ban the importation of troublesome alien species such as this one. But that would contradict the open borders ideology of the Bush administration. Not that Bush cares much about the environment either.

Pythons cannot harm us, and they don't attack humans that often. We can easily take them off us with the hand that alligator probably wish he had at the time.

poor gator...could have done more with it's life that get eaten for a waste of time.