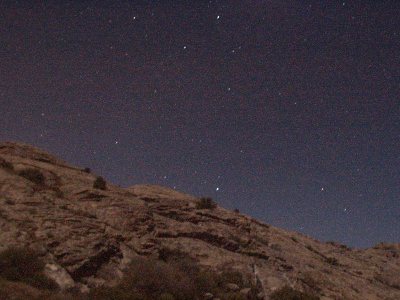 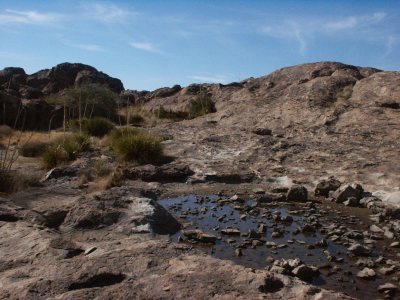 I spent the night of December 4th in the campground at Hueco Tanks State Park outside El Paso. The temperature was above freezing, and initially I hadn't set up the rain fly. However, around 10pm suddenly the wind came in with a vengeance, making it quite cold and most likely in the 20s with the wind chill. I put up the rain fly and spent the night hearing the flapping of the tent. In the morning, I took the Pictograph tour, which was quite interesting. The tour was lead by the park's superintendent who, strangely enough, had a Radio Voice Like Me.

Unfortunately, the other four members of the tour were housewives who had apparently never walked on rocks before, and they slowed it down a bit. If my fellow tourons had had a bit more experience, perhaps the tour might have been able to take in more places. Nevertheless, I saw several ancient pictographs, as well as some from when this was a stop on the Butterfield stage in the late 1800s. Unfortunately, there was also some graffitti of a more recent vintage. After being on the rock for a few years, the graffitti becomes more or less part of the rock and can't be removed. Because of things like that, they now make campers there sit through a 20-minute video giving background information on the park, but also telling you all the things not to do.

After taking the pictograph tour, I took their chain trail up and over the North Mountain. I didn't need the chains, but I guess if you were carrying lots of stuff it might be useful. Then I headed across the rocks, spending time looking for a way off the rock that didn't involve rappeling. After making a few trips to the edge, I finally found a way off the rock. The North Mountain is the only one of the four mountains there that has full access, and it's somewhat similar to Stoney Point, albeit with a foot print a few times larger.

The name "Hueco Tanks" refers to hollows (the Spanish meaning of "hueco") in the rocks which contains collected rain water. One is pictured in the second picture above. They've been used as a water source in the area for thousands of years, and those who've stopped there have left the various pictographs on the rocks. I saw several huecos along the way, some of which were filled with water. The name "Waco" is apparently derived from the "Waco Indians," and their name may be derived from "hueco."

Most of the rock climbers there were boulderers, and I didn't see anyone with top ropes set up, so I decided to move on.

Fort Bowie, which will be covered in this post, was another stop on the Butterfield stage.

The first shot was taken with the camera set at ISO 400, f2.8, and a 32-second exposure. The night was clear and with an almost full moon. That's the longest exposure that the Minolta DImage 5 is capable of, and, while I built a remote-controlled shutter, I didn't bring it with me so I was forced to lock down the tripod and hold the button down. It'd be real nice if the Minolta could take a) wider shots and b) had a longer (or indefinite) bulb time.