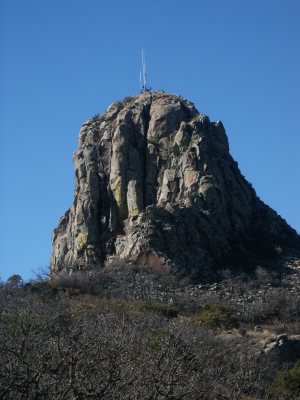 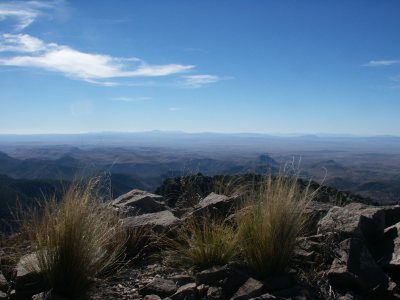 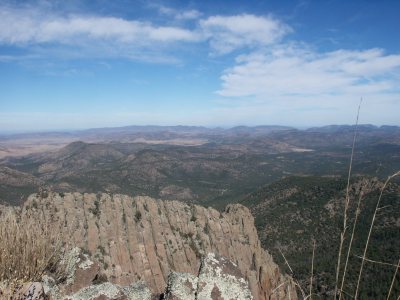 On November 21, I drove through Alpine, Texas (of which more later), bound for Davis Mountain State Park. The park didn't seem that very interesting, but then again I didn't do anything other than stop at the visitor's center. It's divided into two parts: a developed area with some campsites, and a primitive area across the highway. I asked the ranger if the highest point in their county was in the park, and it turned out that it wasn't even close: their highest point was about 6000', but the highest point in the county was Baldy Peak at 8378'. Baldy is set atop Mount Livermore, which is considered its own summit.

I was informed that Baldy Peak was on land owned by the Nature Conservancy. They had an office just down the road in Fort Davis. Luckily, Luckily, and thanks to the kind folks at that TNC office, I was able to join an excursion for the next day.

It was almost too easy. After arriving at the TNC property, I followed two other cars up the rough dirt road for a few miles. Then, when we came to a patch that my car couldn't handle, I parked and then got a lift in one of the other cars.

We parked a down the road from the summit. The two other groups went their own ways, and I set off for the summit alone.

It ended up being a hike of just 3 miles RT with about 1000' of gain, almost all of it on a rough fire roads, parts of which were a bit steep. It took two hours total, with 15-30 minutes up top. Getting to the top is a lot easier than the first photo might imply.

On the opposite side it just involves a short easy stretch of 3rd class. The only exposure would come if you got off route, which might be possible if you don't take note of the way you came up.